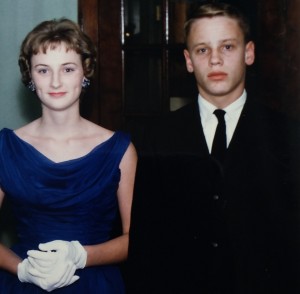 My husband, Dave, had two sisters, Connie and Jinny, three and a half and one year older than Dave. Jinny got married at 16. Connie and Dave became good friends in the many teenage years they spent together in their home in Ohio.

Connie became a nurse and in her early 20s, she married a man from Philadelphia and moved there. He came from a large, close knit family. Over the years, Connie’s family allegiance naturally shifted to the relatives nearby.

When I married Dave, Connie and her husband had been married eight years and had just adopted a baby girl. Later they had a son. Over the next couple of decades, Connie came to several family gatherings in Ohio with her family when we were there, but our contacts with her were brief. Dave felt increasingly disconnected from the sister he had once been close to.

In 2008, Dave heard from his sister Jinny that Connie had been diagnosed  with stage 4 ovarian cancer. Dave called Connie. As they talked, he noticed that she felt very alone. She had been separated from her husband for many years. Her daughter and grandchildren lived a thousand miles away. Her son lived nearby, but he was very busy with his work.

Dave decided to call her weekly. In those first weeks of calls, he listened to her talk about looking for help from crystals and positive thinking. He listened as she recounted her struggles with chemotherapy.

A few months after they started talking, Connie told Dave that she had awakened in the night because she heard a voice calling her name. Somehow she knew the voice was Jesus.

In the months and years that followed, Dave continued to call Connie weekly. They usually talked for an hour. He supported her through three rounds of chemo. He listened to her talk about her fledgling Christian faith, precipitated by that moment in the night.

At first she wanted to look to Jesus AND crystals. Dave told her Jesus wants our sole allegiance, and after some time, she got there. Looking online, I found a church in her neighborhood and contacted the minister. Connie became a part of a women’s group at that church.

In September, 2010, Dave flew from New Zealand, where we were living, to Philadelphia to see Connie. He felt strongly led to do that, and the ten days they had together were a precious time of rediscovering the intimacy that they had as teenagers. They shared many childhood memories. Plus, now they shared a faith in Christ.

Dave continues to be grateful that God nudged him to make a commitment to call Connie weekly for three years and to go visit seven months before she died. He’s even more grateful for that voice calling Connie’s name in the night.

I can suggest so many take-aways from this story. Here are a few:

(Next week: the high cost of pretending to be someone we’re not. Photo: Connie and Dave at age 17 and 16. If you'd like to receive an email when I post on this blog, sign up under "subscribe" in the right hand column.)

Last week I preached at Bethany Presbyterian Church in Seattle on staying motivated in caring for creation. A link to an audio recording is here if you have any interest.