Creative prayer in a foreign language 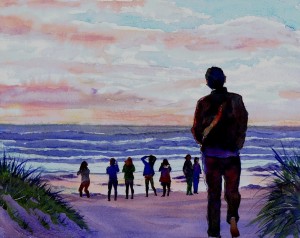 My husband Dave helped lead an international student group for eight years while we lived in New Zealand. Twice a year he organized a retreat for the students, and at the retreats he often taught them the song “Dona Nobis Pacem.” I remember the song from Girl Scouts, and we sang it as a round. Dave taught the students the words, their meaning, and how to sing it as a round.

As I child, I didn’t know what the words meant. The Latin words mean “give us peace,” so the song is actually a prayer. (You can listen to it here.)

The international students loved the song. I suspect part of their appreciation had to do with the equalizing effect. Latin was a foreign language to all of them. The group used English for songs and Bible studies. The students’ ability in English varied greatly, ranging from native speakers to experiencing it as an uncomfortable language they were trying to learn. Here, in one song, they were all equally unfamiliar with the words, yet they were praying it together.

I love to pray in other languages. We lived in Iran for six months way back before the Iranian revolution, when I was in my twenties. I learned the Lord’s Prayer in Farsi while we were there. Today I only remember the Farsi for “Our Father, who art in heaven, hallowed be your name.” I pray it often, to remind me to thank God for the gift of our time there, and as a stimulus to prayer for people we know from Iran, American politicians who make decisions about relations with Iran, and the church of Jesus Christ there. (You can read about our Iranian adventures here, and see amusing photos of Dave and me as young adults.)

We also spent a year in Sweden, where Dave did dental research. I was in my thirties. I learned one verse of the famous Swedish hymn, “Children of the Heavenly Father” in Swedish. Today I remember only one phrase, but I pray it often: “More secure is no one ever, than the loved ones of the Father.” Those words, in Swedish and in English, are so soothing! And they remind me to pray for Swedes we know and for the church in Sweden.

The foreign language I know best is French. I have a Good News version of the New Testament in French. The sixth or seventh grade French works well for me. I also have a simple translation of the Psalms into French. I find that when I pray the Psalms in French, I slow down (because I have to!), I think hard about what the words mean, and I am deeply aware that God is at work around the world in all countries among people who speak so many different languages.

Back in 1996, seminary professor Charles van Engen wrote, “We are all being radically impacted by the largest redistribution of people the globe has ever seen.”[1] This redistribution has continued to increase in the two decades since those words were written, and I see the effects of this global movement of people in so many ways, ranging from the Somali Muslim student who works at my gym (and told me how his family prepares goat meat for dinner) to newspaper articles about rising nationalism and tribalism in so many places.

Christians are always called to pray for changes going on in the wider society, especially changes that deeply impact human beings.  One way I find I can pray for this very large “redistribution of people” is to pray, in a very small way, in other languages.

(Next week – Creative prayer: avoiding co-dependence in prayer. Illustration – international students waiting at Warrington Beach near Dunedin, New Zealand, for an Easter sunrise service, watercolor by Dave Baab. If you’d like to receive an email when I post on this blog, sign up under “subscribe” below or in the right hand column of the webpage.)

In my 2018 book on pastoral care, Nurturing Hope: Christian Pastoral Care in the Twenty-First Century, I discuss seven trends in pastoral care, one of which is “Pastoral Care Occurs across Ethnicities and Religions.” I discuss the seven trends in a blog post. Another item on this website that’s relevant to the topic of prayer in response to the global redistribution of people is an article called, “To be a Neighbour Must Include Listening.” How can we pray if we don’t listen?