Connections between the Bible and prayer: Sensory prayer in Revelation 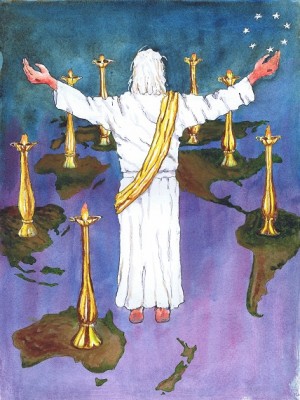 Through my childhood, in Episcopal and Anglican churches, incense played a role on special occasions. The priest would walk down the center aisle swinging a chain with a metal ball on the end. Inside the ball, incense was burning, and the smoke came out of cleverly shaped holes in the ball.

As I child, I was never sure if I liked the weird smell of incense. But it definitely signaled something about holiness to me.

Fast forward fifty-some years to the ordination of my colleague, James, to the Anglican priesthood. The ordination was held at St. Paul’s Anglican Cathedral in Dunedin, New Zealand, and during some of the prayers, James lay face down on the marble floor.

How are incense and laying face-down related? Both draw on images of prayer in the book of Revelation.

In Revelation 1, the writer, who identifies himself as John, says he was “in the spirit on the Lord’s day” (verse 10). He hears a loud voice, then turns and sees an extraordinary vision of Jesus standing among seven lampstands, with white hair, eyes of flame, feet like burnished bronze, a sword coming from his mouth, and seven stars in his hands (verses 12-16).

John says, “When I saw him, I fell at his feet as though dead” (verse 17). This posture of awe and submission is echoed in many ordinations in the Roman Catholic and Anglican traditions. I was privileged to see it when James was ordained.

Chapters 2 and 3 of Revelation contain the powerful letters to the seven churches of Asia Minor, Jesus’ confronting and comforting words that are still relevant today.

Revelation 4 describes a vivid scene of worship involving precious gems, thrones, flashes of lightning, a crystal sea, four strange creatures singing “Holy, holy, holy,” and 24 elders who “fall before the one who is seated on the throne” (verses 3-11). So again, worshippers are showing their devotion with their whole bodies in a position of submission, awe, and trust.

In Revelation 5 a drama unfolds. A scroll has been sealed with seven seals, and a mighty angel looks for someone worthy to undo the seals. No one in heaven or on earth is worthy, except for the Lion of the tribe of Judah, who is also the Lamb. As the Lamb takes the scroll, the four creatures and the 24 elders again fall before him and sing, each hold a harp and a golden bowl full of incense (verses 1-8).

Because of many excesses in the Roman Catholic Church of the late Medieval period, the Protestant Reformers tried to return to simple expressions of faith: grace alone, faith alone, the Bible alone as a source of authority. This was often accompanied by simplifying everything: no art in worship spaces, no incense, no laying face down during ordination services.

I’ve been heavily influenced by both the Episcopal/Anglican heritage of my childhood, and the grace-oriented, Bible-focused faith I learned in my early adult life in various Protestant settings, accompanied by very little art, incense or other sensory-focused experiences.

In recent years I’ve been asking myself this: What does a rich prayer life look like when it draws on all bodily senses? How can smells, taste, touch, bodily movements, and art contribute to prayer? How can we grow in bringing our whole bodies to God in prayer?

Revelation offers a few answers to my questions, and, as Revelation always does, raises yet more questions.

(Illustration: Dave Baab’s interpretation of Revelation 1:12-16. Notice the seven lampstands, which Jesus in Rev 1:20 identifies as the seven churches. In the painting, Dave has broken up the continents and put one lampstand on each continent, symbolizing to Dave the reassuring reality that the church on every continent belongs to Jesus, and that Jesus will keep the light burning in and through his church throughout the earth. Also note the way Dave represented Jesus’ white hair, golden sash, bronze feet, and the seven stars in his right hand. I have the original of this painting hanging right beside my desk, reminding me that Jesus is Lord of the Church even in the midst of decline, scandal, conflict, and discouragement. Many times the painting has brought tears to my eyes.)