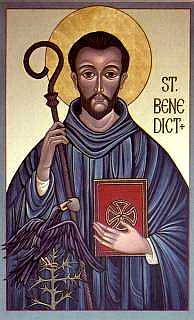 Our times are not much different.

In his early adulthood in Italy, Benedict became so disillusioned and disgusted with the affluence and decadence of his society that he withdrew to an isolated cave to live a solitary life of prayer. Other people soon joined him for many of the same reasons, and a monastic community began to grow. The Rule of St. Benedict was written to guide the community as its life developed.

The genius of Benedict’s Rule comes from its simplicity and its call back to the basics of scripture, prayer, solitude, community, and service, which transcend political turmoil and cultural upheaval. The Rule offers guidelines for ordinary people living ordinary lives. In the midst of the frenzy of twenty-first century life, the simplicity of Benedict’s priorities can enable us to center our lives in Christ in the midst of the many responsibilities, priorities and commitments that absorb us.

Benedict was by no means the first monk interested in monastic communal living. As early as the second century after Christ, individual Christians left the comforts and stresses of society to pursue a life of solitary prayer in the wilderness. When more Christians joined them, all the issues of community living presented themselves.

Benedict’s Rule was based on earlier writings that gave guidelines for communal Christian living. The Rule of St. Benedict has depth, balance, and a practical orientation that changed the face of spirituality in the Western half of the Christian world.

The Rule, a short book composed of a prologue and 73 brief chapters, addresses everyday topics: work, recreation, food, silence, rest, study, prayer, and the need to listen. There are some sections that proscribe discipline and daily routines in a way that is foreign to us, but much of the Rule is still applicable today for monastic living and presents significant insights even for those of us who are not called to a monastery.

Benedict lays out three monastic vows: stability, conversion of life, and obedience. All of these have practical application in everyday life for any Christian. Benedict believed that we have enough, that God has given us all we need for our daily lives, which helps us slow down our striving and enables us to look for God in the everyday aspects of our daily lives. Benedict calls us to the disciplines of prayer, self-examination, and confession, all of them exercised in community.

Esther de Waal, in Living with Contradiction: An Introduction to Benedictine Spirituality, writes about the impact of one of Benedict’s priorities:

If I try to follow St. Benedict I find that I have to think about the material things in my life, and that I am being called to establish a right relationship with all my possessions. I see myself as a steward, holding these things in trust, enjoying but not owning them. I find this easier to accept in theory than in practice. But when I do remind myself that all these good things belong to God and not to me, I find that my sense of gratitude for the extraordinary generosity of God brings with it also a sense of freedom. All things are on loan, all things come from God, and that includes my own body as well. I have no rights and I do not possess.

Gifts of Freedom: The Sabbath and Fasting, article by Lynne Baab that draws on her monastery visits.