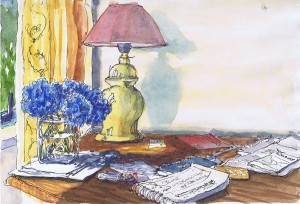 What prompts you to pray? I wrote last week about three of my prayer prompts and asked readers to respond with examples from their own lives. I had no idea that something unexpected had happened to my blog – the ability to make comments had disappeared. I’ve contacted my website fellow and he’s hopefully going to fix that.

I mentioned last week that one of my prayer prompts is ambulances and fire trucks. One of my friends wrote:

After I wrote my post last week, I wondered why I don’t have the habit of praying when I see a police car. I’m going to try to add police cars to my prayer prompts.

The nurse I mentioned last week, who told me she prayed when she saw hospital helicopters, wrote:

“Working for eight years in an Emergency Department which was the 14th busiest in the USA, we were required to have periodic practices of mass casualties. Volunteers would have been made up to look like various levels of injuries, say from a plane crash, and we’d triage patients as treatable or not – even if actor patients were talking to us. I know the New Zealand first responders of Christchurch did a terrific job with the Mosque casualties. Nursing is an incredible way to serve. Praying with and for patients and loved ones is a natural way to address great suffering.”

This friend allowed her job to deepen her prayers. I wonder how I could see various components of my work as prompts to prayer.

“One of my prayer commitments is to look for at least one person each day who looks like they may need encouragement and send an ‘arrow prayer’ for them (you know, sort of ‘shooting them’ or shooting an arrow for them to God, with a request for their encouragement).  It has been people I’ve seen on the road when I’ve passed in a bus, or people on the bus, or in a shop, even those in my work setting whom I don’t know well.  I’ve had a couple of times when people have actually looked around, or looked a bit startled as I have prayed for them, which is always fun.”

She also mentioned that she keeps a couple of stones on her bedside table. One of them comes from the specific place where her university is thinking of expanding. The rock reminds her to pray for everyone involves in the dream of expansion.

Another friend wrote that she uses people’s posts on Facebook as reminders to pray for friends. I do the same, and I am often very pleased by the level of support expressed on Facebook when people are ill or grieving.

My encouragement to you today is to look around at your life. What everyday physical objects or habitual actions might become prompts for prayer?

We are just over two weeks into Lent. If you haven’t settled on a Lenten devotional, I’ve got two options to suggest to you: