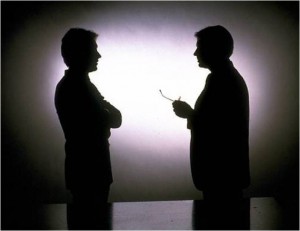 I had quite a few good stories to use in that one remaining chapter, but I didn’t have a central idea for the chapter. My stories and ideas felt scattered.

I set the book aside to go to an academic conference that I was not particularly excited about. The only thing I was anticipating was two keynote talks by Nancy Tatom Ammerman. She described her most recent research on spiritual patterns among people in various religions, and to my great delight she gave me the unifying idea for my troublesome chapter. In addition to helping with that chapter, her research helped me gain an entirely new perspective on the significance of listening in all forms of discipleship and spiritual formation.

Ammerman and her team of researchers interviewed dozens people in Boston and Atlanta about their spiritual convictions and practices. They sought out people with diverse religious commitments: Protestants, Roman Catholics, Jews, Buddhists, Hindus, Wiccans, atheists, agnostics, New Age practitioners, etc. They found that the people who had the deepest spiritual commitment also had friends with whom they talked about the overlap between their spiritual commitment and their everyday lives, between the sacred and the secular, between the holy and the ordinary. Ammerman called these friends “spiritual compatriots.”

The research showed that people most often found these spiritual compatriots in three settings: congregations, the home and the workplace. The congregation has special significance, because congregations provide places for people to learn to talk about this overlap between God and daily life. People then brought that ability to talk about God’s role in everyday life into their homes, and they often found people at work with whom they could talk about it.

After listening to Ammerman, I spent a lot of time thinking about the places in congregations where people talk about the overlap between their faith and their daily life: small groups, men’s and women’s events, retreats, coffee hour, etc. Good sermons model ways to talk about this overlap. The key is to make space for people not just to chat and get to know each other, but to go deeper to the place where they are able to talk about where God is in their daily lives, how they feel called to follow Jesus in everyday life, where they feel the Holy Spirit’s guidance and empowering.

I began to think about pastoral care, which has often been viewed as a good and necessary thing, but somewhat separate from discipleship or mission. Often the major crises of life are the places where we see God at work most profoundly. Maybe God seems clearly present guiding the cancer patient to the right doctor or helping feuding siblings to get along at a funeral. Maybe God seems particularly absent in a crisis. Making room for people to talk about God’s presence and absence in big challenges, a major task of pastoral care, now seems to me to be integrally connected to Christian discipleship and mission.

Conversations where we can talk about the overlap between the Christian faith and daily life require good listening, drawing people out, and asking perceptive questions. We need to allow conversations to go on long enough for people to work their way around to the issue of where and how they experienced God in a particular situation. Because of Nancy Ammerman’s research (recounted in her book Sacred Stories, Spiritual Tribes: Finding Religion in Everyday Life) I saw the significance of listening in congregational life in a whole new light.