Connections between the Bible and Prayer: the instructions in James 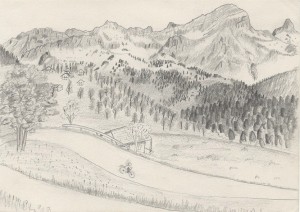 In mid-2010, I began to have some weird medical symptoms. I was tired all the time, and my left foot felt cold, even if the room was warm. We were in New Zealand, where spring begins in September. As spring went on, and then summer began around Christmas, the weather got warmer and my foot got colder. I got more tired, and I talked to the people in my department about working fewer hours.

Of course, I went to the doctor about this, and got a referral to a neurologist. He put me through a raft of tests, and everything kept coming back normal.

In late February, 2011, I was talking with Andrew, a lovely intern at our church. He asked me how I was doing, and I told him about this weird cold foot and fatigue. He asked if I’d like for him to round up some elders and come over to my house and pray for me.

“Yes!” I replied enthusiastically. I was quite pleased about this, because it seemed to respond to clearly to one of the longest passages in the New Testament about prayer, from the letter of James.

“Are any among you suffering? They should pray. Are any cheerful? They should sing songs of praise. Are any among you sick? They should call for the elders of the church and have them pray over them, anointing them with oil in the name of the Lord. The prayer of faith will save the sick, and the Lord will raise them up; and anyone who has committed sins will be forgiven. Therefore confess your sins to one another, and pray for one another, so that you may be healed. The prayer of the righteous is powerful and effective. Elijah was a human being like us, and he prayed fervently that it might not rain, and for three years and six months it did not rain on the earth. Then he prayed again, and the heaven gave rain and the earth yielded its harvest.”   —James 5:13-18

The passage refers to I Kings 17-18, one of the more vivid Old Testament stories. Elijah is guided by God to pray for no rain as a punishment to Israel for its disobedience. And when he did pray for rain, the setting was the dramatic competition with the prophets of Baal to see whose God would bring rain.

Of course, passages like this one in James raise so many questions about unanswered prayer. When we pray for something, and God does not appear to answer, does that mean we haven’t been faithful like Elijah was? Does it mean we haven’t prayed hard enough?

Before 2011, I had quite a lot of experience with inner healing prayer making a significant difference in people’s lives, but I had almost no experience with seeing prayer contribute to physical healing apart from medical interventions. I had seen God answer many prayers in settings related to physical illness: giving relief from pain, giving doctors wisdom about the right treatment, and helping caregivers find strength. I was quite sure God answered many kinds of prayer related to physical illness, but I simply hadn’t seen a lot of direct healing from disease in answer to prayer.

On March 7, 2011, our intern, Andrew, came to our house with two elders and the spouse of one of the elders. Andrew brought a vial of oil, and he anointed my forehead with the oil. Then he, my husband Dave, and the others prayed for me. Fervently. Passionately. With urgency.

A week later I noticed that my foot wasn’t as cold. A few weeks after that, my foot felt normal again. It took a couple of months for my energy to come back.

In the seven years since that night, I’ve experienced times in cold weather when both of my feet have gotten cold, but never again the odd sensation of having one cold foot in a warm room. I had good energy for a couple of years after that night. Sometime in 2013 or so, aging caught up with me and I felt a reduction in energy. Since then I’ve had days where I’m as tired as I was in early 2011, but never day after day.

Truly God healed me because Andrew obeyed the words in James 5. It was a gift of love from God to me. And it was so good to experience the direct application of words from the Bible about prayer.

(Next week: sensory prayer in Revelation. Illustration by Dave Baab. If you’d like to receive an email when I post on this blog, sign up under “subscribe” in the right hand column of the full web page.)

Good news about my book, Sabbath Keeping: Finding Freedom in the Rhythms of Rest. It just went into its 14th printing, and the 13th printing was only about two months ago. I’ve also written a Bible study guide called Sabbath: The Gift of Rest, and lots of articles about the Sabbath, which you can access here.