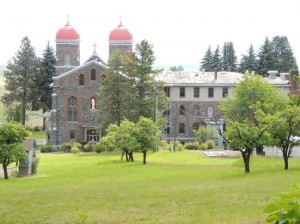 “I’ve decided to come with you to the monastery again this year. Last year I was able to pray there in a way I’ve never experienced before.”

For a half dozen years, I took a group of women from our congregation to a Benedictine monastery for women in Idaho for a weekend. Every time I walked into the monastery, I had a strong sense that people had prayed in this place for many, many years, and that I would be able to pray there too. I was glad when one of the young women at church confirmed my experience.

Every year we toured the monastery so first-time visitors could get a sense of the space and the structure. One year the sister who was giving us a tour said that Benedictine life is all about sacred places and sacred times, and indeed it is the serenity of place and the rhythm of time that are most noticeable to a visitor. I have stayed in numerous Benedictine monasteries. Two of them were housed in large building with “chapels” that looked like small cathedrals. On the opposite end of the spectrum was a monastery in a large house with a chapel in the basement. What they have in common is a sense of the space being consecrated to prayer and to prayerful work.

What’s also striking about Benedictine monasteries is the schedule of prayer services. Some have the traditional seven services each day, some five, some two or three, but in every case, the prayer services – also called the divine office or liturgy of the hours – set a rhythm for daily life.

In addition, immediately visible is the spirit of hospitality. According to Benedict, guests are to be welcomed as if they are Christ himself. Most monasteries devote space to guest quarters, and they expect that hosting guests will be a significant ministry for them.

The priorities of prayer and hospitality are rooted in the Rule of St. Benedict, a foundation that lies behind much monastic life today. Benedict’s balanced view of life calls monks and sisters to a rhythm and order that are visible when visiting a monastery. It may seem that these monastic patterns have nothing to do with the ordinary daily life that most of us experience at our jobs or in our families. Yet many people young and old have talked with me about the ways they have been impacted by visits to monasteries. They have enjoyed the quiet and reflection while they are there, and they have also carried something significant back home with them.

The popularity of Kathleen Norris’s books is one indication of a growing awareness that we have something important to learn from the monastic tradition. Norris writes in several of her books about her experiences staying at Benedictine monasteries. What she has learned in those visits has spilled over into her daily life. In the post for next week, John’s story, we will see the way the visit to a monastery called him to reexamine several aspects of his daily life.

Question to ponder for the week: what are the structures of your life that nurture your spiritual development?

(This is the first post in a series on Benedictine spirituality. Excerpted from A Renewed Spirituality: Finding Fresh Paths at Midlife (InterVarsity Press, 2002), copyright © Lynne Baab. Photo: St. Gertrude's Monastery, Cottonwood, Idaho. If you’d like to get an email when I post on this blog, sign up under “subscribe” in the right hand column.)

Gifts of Freedom: The Sabbath and Fasting, article by Lynne Baab that draws on her monastery visits.