Celtic Christianity: the earth and art 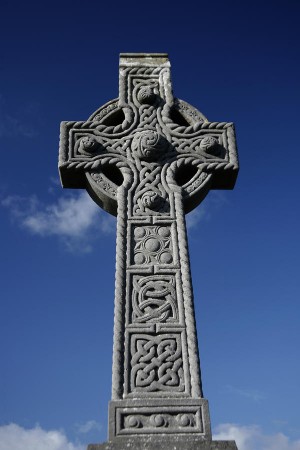 It’s no accident that there are rabbits, mice, lizards and fish drawn between the lines and around the edges of the pages of the Book of Kells. The profound connection that the Celts felt between their lives and God’s creation spilled over into their art.

Sister John Miriam Jones, in her book With an Eagle’s Eye, writes that their sense of God’s presence and love led the Celts

to artistic expressions using metal, wood, stone, paint, words, and music. These wholehearted art lovers found countless ways to utilize the arts in expressing their beliefs and their love. The monastic era coincides with the production of the best of Celtic metalwork, manuscripts and sculpture – all of which attest to their awareness of and yearning for God’s immanent presence. [1]

She believes that all of this creativity and artistry comes from the truth that “deeply felt love requires expression.” [2]

The Celts saw in the creation the deep love of the Creator, and they felt moved to create also. Their art was deeply symbolic. The Celtic knots that have become so popular in jewelry and art and symbolic of the love of God, which has no beginning or end.

The Celtic cross, which has also become popular in recent years, is a cross with a circle behind it. The circle probably represents the earth or the sun, and the cross represents Jesus dying to conquer the forces of evil. To the Celts, the cross as a shape in art would never be separated from the strong meaning of Jesus’ death.

Many of the ancient high crosses in Ireland and Britain, large stone works of art with a worn frieze decorating the surface of each cross, show the story of our God who rescues, saves and feeds us. Often both the crucified Christ and the risen Christ are depicted. On many of the crosses Christ is shown with outstretched, wounded hands to bless the world as both Creator and Redeemer.

Part of the appeal of Celtic Christianity in our time is this connection between the creation, artistic expression and our faith in God. As we experience God’s handiwork in nature, we may identify with the Celts who lived among the trees and hills and woodland animals, and who saw all of nature as an expression of God’s creativity and as a true gift from God.

As we engage in any artistic expression, whether it’s quilting or drawing or baking or making music or woodworking or writing poetry, we receive deep encouragement from the Celts who seamlessly integrated their faith and their art. They created art for the love of Christ. They experienced themselves as connected to their Creator as they pursued artistic expression, and they expressed their understanding of God in symbols that were full of meaning for them. We can do the same.

These symbols and images can play a role when we want to break free of the pervasive, materialistic images bombarding us in the media. They may help us deepen our connection to the eternal and the holy. Celtic knots and scampering mice can become anchors for us, connecting us to God in a nonverbal but profound way. Esther de Waal, herself descended from Celts, writes in her wonderful book, The Celtic Way of Prayer:

Above all the Celtic tradition has reminded me of the importance of images, those foundational images whose depths and universal character have always brought such riches to Christian understanding. Most people today are being constantly battered by the succession of superficial images that meet us in the world of consumerism, in television and in advertising, where there is no chance to spend time testing their true meaning. Therefore, it now becomes vital, more than ever, to recover the fundamental images of fire, wind, bread, water, of light and dark, of the heart. These are the great impersonal symbols that are universal, understood by Christian and non-Christian alike. An Indian Christian priest once said that they were like a great bridge that Christ has thrown across the world and across history so that men and women may walk to meet each other and be completed in him. [3]