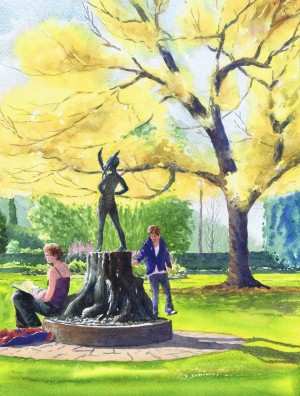 The rest of the people who responded to my question said that they have a variety of ways of referring to a Facebook friend who they do not know in person or do not know well enough to call a real friend. They might say “Facebook contact” or “someone I know on Facebook.” One woman said that when she refers to friends, she usually uses some kind of modifier anyway: “friend from high school,” “friend from work,” or “Facebook friend” if she knows the person only from Facebook. Many of those friends from high school and from work are also her friends on Facebook, but she doesn’t think of them that way because the connection is rooted elsewhere in her life.

Online social networking has changed friendship vocabulary in one notable way. The word “friend” has become a verb. To “friend” someone is to request that they become a friend on a social networking website or to accept their request. To “unfriend” refers to the act of deleting him or her as an online contact. In my interviews, no one used “friend” or “unfriend” as verbs for anything other than online actions. Perhaps in the years to come, “friend” or “unfriend” as verbs will also be used to refer to acts related to face-to-face friendship, but I didn’t hear anyone use the words that way.

I like some aspects of the verb “friending.” I want to encourage discussion about the ways friendship—online or offline—is like a verb. Being a friend involves significant actions of caring and commitment. The old adage, the only way to have a friend is to be a friend, is still profound and true. Learning how to be a friend, and engaging consistently in actions that express friendship, reflects the reality that friendship is more like a verb than a noun.

I believe that nurturing deep friendships in any setting requires determined intentionality and commitment. Today’s Western lifestyle creates three major challenges to friendship: the online component of so many relationships, the frantic pace of life, and the scattering of family and friends to dispersed locations. Never before have so many people conducted so many of their relationships using such a wide range of technologies that include cell phones, computers, tablets, gaming consoles connected to the internet, and many other forms of technology.

Never before has the pace of life been so frantic, with electric light making day and night irrelevant and with people racing around juggling a myriad of commitments. And never before has mobility been so rampant, resulting in families and friends dispersed to the four corners of the world.

As you think about these shifts and challenges, here are some questions to ponder about your own friendships:

What is the balance in your life between online, phone and face-to-face communication with friends? What priority do you give to each? What do you think and feel about your patterns of connection?

What role do busyness and distance play in making friendships challenging for you? What strategies have been successful for you in overcoming those challenges?

(Next week: Confidence about friendship. Illustration by Dave Baab. If you'd like to receive an email when I post on this blog, sign up under "subscribe" in the right hand column of the whole webpage.)

This is the fifth post in a series. The previous posts are:
Nuturing friendships in a cellphone world
Strong opinions and responses
My conversation partners about friendship
Two views about commmunication technologies

Listening is a key friendship skill. I've got three articles on this website about listening. You can access them here.