Creativity and Imagination: One author’s perspective 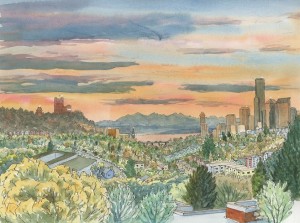 I’m thinking about an article I might write. I use my imagination to ponder quite a few things: the needs of the reader, the way I might structure my article, the stories I might tell, the main point I might get to at the end, and the way I could open to article to hint at the main point and draw the reader in. However, I never write the article. I have used my imagination, but I have not been creative. Creativity only occurs when we bring our imagination into the light for others to see.

“Most people assume that when we talk about imagination, we really mean creativity. Not so. . . .  Each person has an imagination, not all of us have creativity, which is only a function of imagination. Creativity results in art; the result of imagination might be art, but it could just as easily be something practical.”[1] A friend of mine affirmed Forbes’s viewpoint in a response to my post last week: “Imagination comes to life through a creative medium.”

I’m glad Forbes affirms that when we talk about creativity, we must include multiple arenas for creativity, everything from what we consider the arts – poetry, dance, painting, sculpture, and many more – to all sorts of small and large activities where creativity plays a role, such as teaching, gardening, setting a table, and cooking. In the third post in this series, I wrote about “hidden art,” a concept which highlights the multiple settings where creativity can be expressed.

I have loved Forbes’ book since I read it several decades ago. She links imagination to God in vivid ways that lift my heart:

“Most of us don’t use our imagination because we don’t know God has given it to us; nor we been taught how to use it. . . . Imagination is the imago Dei in us. It marks us as God’s human creatures. It help us know God, receive his grace, worship him, and see life through his eyes. That means, imagination is a way of seeing life – or ways of seeing life.” [2]

She is clear that imagination can steer us toward or away from truth, so we have to be careful about what we perceive and nurture with our imaginations. However, “the potential for understanding truth is always greater when perceived with imagination.” [3] She quotes C. S. Lewis, who said that imagination is the “organ of meaning.” [4]

I posed some questions last week about the connections between creativity and imagination, and I got some great answers from readers. I’ll use some of those answers in future posts, and I’ll say right here that I’m not sure I buy Forbes’s description of the way imagination and creativity are connected. But what I appreciate most about her book is the way she makes Jesus’ creativity and use of imagination come alive.

Next week I’ll write more about Jesus’ creativity as Forbes describes it. Here’s one of her statements about Jesus and imagination:

“Imagination is, literally, image making. Christ is our best example of this image-making function. He made images and at the same time was image incarnate – the image of God. We, too, are to be an image of God. We’re made that way, but in us the image is cracked, distorted, painted with some garish color. When Paul says that we will become like Jesus, the first fruits, this is what he means. The image of God will be restored to us. God will strip off the cheap paint  to reveal the natural patina and image that was there all the time.” [5]

God who created our minds and hearts, we rejoice at the joy of using our imagination, but we need your protection and guidance when we imagine. Your image in us is cracked and distorted. Restore your image in us through Christ who redeemed us and through the Holy Spirit who guides us and prays for us. Thank you.

(Next week: the way Cheryl Forbes describes Jesus’ creativity and his use of imagination. Illustration by Dave Baab, another of his pandemic paintings: downtown Seattle and the Olympic Mountains from Judkins Park in southeast Seattle. I love getting new subscribers. Sign up below to get an email when I post on this blog.)