Two options for what to do when the news overwhelms you 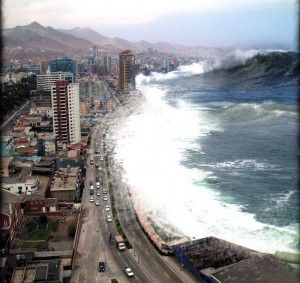 I've decided to fast for a while from national and international news. I don't view this as a long-term plan, because I'm committed to knowing what's going on in the world so I can pray. But for right now, I'm going to see what 1-2 months without news feels like. In the past few months I've been feeling increasingly overwhelmed and demoralized by the news: Syria, Iraq, Hong Kong, Ebola, the abducted girls in Nigeria and on and on.

The last time I felt this way, I took a different path, and I wrote about it in a blog post right after the tsunami in Japan in 2011. I'm going to re-post what I wrote, even though some of the specifics are out of date, because my response in 2011 is another good option. Re-reading this post is a bit of a time tunnel, and it shows how the deeply disturbing events at one stage get a bit lost with the passing of time.

Here's what I wrote in March 2011: A LOT is going on in the world these days. The earthquake in Christchurch and the earthquake and tsunami in Japan with the attendant nuclear fears. The brand new war – or is it just “air strikes”? – in Libya. Agitation for democracy in numerous other countries. Elections, wars, unrest, flooding and environmental disasters elsewhere.

How can we summon up the enthusiasm to pray for yet one more huge and pressing need? How can we pray wisely?

I got some advice 25 years ago that I think I need to resurrect now. In the mid 1980s I was engaged in a steep learning curve about Christian relief and development ministries around the world. Someone told me to learn as much as I could, but with respect to financial contributions and prayer, to narrow my focus. Many times, I have passed that same advice onto others: Pick one country or part of a country to pray for and contribute to. Or pick one kind of ministry – wells, microcredit, education, medical, etc. – on which to focus your contributions and prayers. Don’t feel you have to care passionately about everything, because you simply can’t. Trying to care about too much results in compassion fatigue, which leads to caring about nothing.

I wonder if that isn’t good advice right now. I was praying frequently and passionately for the people of Christchurch until the events in Japan and Libya came along. Now I find I’m not praying for any of them very often because I am frankly overwhelmed at the needs.

This morning I learned about a colleague in Christchurch, the minister of an inner city congregation. I had spoken to her some months ago, and she told me that after the earthquake six months ago, her building was so severely damaged that the congregation was facing difficult decisions about the future of that building. She described how stressful it was.

This morning I found out that she can’t get into her office at the church, because the building is in the zone of the city that is still not accessible after the recent quake. In addition, her home was so severely damaged by the recent quake that she can’t live there. Mercifully, she has access to her home, so she can get stuff out. However, the things she need in her church office continue to be completely inaccessible.

If you've been feeling overwhelmed or frozen like I have, what one situation might God be calling you to pray for?