Draw near: Confessing sin without wallowing 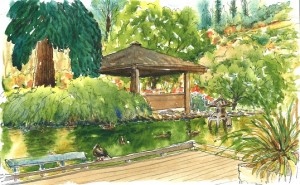 Esther de Waal, in her book The Celtic Way of Prayer, writes about the sense of guilt that bedeviled her childhood, the feeling of never being good enough, of failing again and again in trying to measure up. In Celtic Christian prayers she found something different, a complete absence of that kind of self-focused guilt, and a joy in Jesus’s gift of forgiveness. She writes that in the Celtic poems and songs,

“I have found sorrow, deep sorrow, many tears, an outpouring of grief, but it is never turned on itself, never the kind of sorrow that becomes inward, self-destructive guilt, feeding on itself. Tears, as I learn them from the Celtic Christian tradition, are never what so often my own tears become: tears or rage or of self pity, tears of frustration, tears because I have put my own self at the center of the picture and feel that I have not received the treatment that I deserve – the tears of a child, in fact, for whom ‘life isn’t fair.’ . . .  But true tears are those of real, deep personal sorrow, of repentance, that lead to the determination to change.”

Because of the Celt’s joy in nature, it would be easy to believe that they saw everything as good. Instead they had a healthy balance between the wonder of the created world and the presence of evil in that world, including a particularly keen sense of their own tendency toward sin. This influenced their patterns of prayer in a profound way, calling them to express sorrow and sadness in prayer as well as praise, thankfulness, and joy. They understood clearly that the death of Jesus was absolutely necessary to buy back the universe from Satan, who had taken the world under his power because of human sin.

If we are certain that Jesus alone can undo the effect of sin, perhaps we can more easily confess our sins and let them go, rather than wallowing in guilt or shame. Western culture that influences us so deeply has two characteristics that make it difficult to confess sins and receive forgiveness gladly. The hyper-optimism common in so many settings denies sadness, so when we feel sorrow for our sin, it seems like not only the sin but the sorrow as well is something we’re doing wrong. Admitting powerlessness is also incredibly counter-cultural in America and many other places. We like to think we’re powerful, but in fact we can do nothing to deal with our sins. Only Jesus can forgive.

I found it amusing yet sad to dig out some material I wrote about Celtic Christian patterns of prayer back in 2002. Here’s what I wrote, even more relevant today: “With world events in our day showing us evil in new ways and inciting fear for our personal and national future, it’s especially important that we achieve a balance like that of the Celts.” The balance I was referring to was an awareness of the beauty of the world created by God, along with sorrow for sin and brokenness. This results in grief and sadness, coupled with joy and thankfulness for God’s creation, Jesus’s redemption, and the empowerment and guidance of the Holy Spirit.

If you don’t know much about Celtic Christianity, I wrote a couple of paragraphs of description in my post Celtic thankfulness. If you’d like to learn more, Esther de Waal’s The Celtic Way of Prayer is a beautiful book.

Here’s a Celtic Christian prayer of confession for us for today. Note the way it affirms God’s power and beauty while also asking for forgiveness, a combination that brings a different flavor to confession of sin.

(Next week: a favorite prayer about peace and much more. Illustration by Dave Baab: Botanic Garden, Dunedin, New Zealand. If you’d like to receive an email when I post on this blog, sign up under “subscribe” below.)

My strongest selling book, Sabbath Keeping, is now available as an audiobook on many platforms, including Audible.