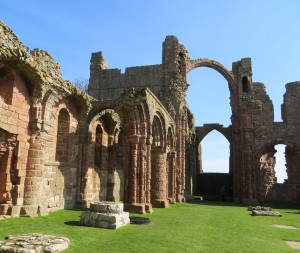 The Christian community at Lindisfarne was founded in the seventh century by Bishop Aiden of Lidisfarne. Aiden, who was born in Ireland, was a monk on the island of Iona when he was asked by the king in 634 to come to Northern England in the role of bishop. The king was a Christian, and he gave Aiden the mandate of spreading the Gospel in Northern England.

Aiden set up a base on the island of Lindisfarne, connected to the Northeast coast of England at low tide. He spent his first ten years as bishop wandering the countryside of Northern England, talking to people about the gospel. He set up numerous Christian communities.

He received money from various sources, and he used all of it to help the poor and to buy people, especially children, out of slavery. At one point the king gave him a horse to aid him in his travels and evangelism, but Aiden immediately gave it away. He felt that the best way to talk to people about Jesus was to walk at their level, not to be above them on a horse.

Aiden also established a community on Lindisfarne to train ministers. The training emphasized study of the Bible, prayer, fasting, and walking the countryside with Aiden to tell people about the Gospel. That community lasted long after his death.

Aiden is often called the apostle of England because of his evangelistic work that had such a lasting influence. A few lessons I’ve been pondering from Aiden’s life:

1. Aiden seemed to have a seamless commitment to:

I love his wholistic approach to physical well-being, spiritual practices, and social justice. I wonder which components of his approach are the most and least apparent in my life.

2. I ponder what it looks like today to walk at the level of people in need. Obviously horses are seldom involved in this decision in our time, but we still need to think about how to build bridges across barriers of culture and socioeconomic level. I wonder what acts and attitudes of humility today would parallel that moment when Aiden gave away the horse.

3. After ten years evangelizing the people of Northern England, Aiden retired to another island to pray and meditate for the rest of his life. Ten years is not a very long time to have made such an impact.

Thinking about Aiden’s ten years of ministry has been helpful to me. I am a very late bloomer, partly because I battled depression from age 27 to 43. After coming out of my depression, I was ordained as a Presbyterian minister at 45. I got my first book contract that same year. At 55, I began a ten-year teaching career. The past 21 years since my ordination have been full and rich, but still, I often feel a great sense of loss about those 16 depressed years. Twenty years of productive ministry don’t feel like enough.

I feel a sense of freedom when I ponder the fact that Aiden did what he was called to do for that significant decade, and then left it behind to engage in prayer and meditation on the Bible. I’m not comparing the significance of my ministry to Aiden’s, but I do find myself thinking that if ten years was enough for Aiden, surely I can accept that twice that could be enough for me.

When I visited Lindisfarne (at low tide!), I was stunned by the number of visitors there on a weekday in September. There were several hundred cars in the parking lot, and people streamed across the island. What a joy to learn about the man who founded the monastery on Lindisfarne. May we soak up the model of faithful Christians who speak to us from across the ages.

(Next week: first post in a new series on creative ways to pray. Illustration: the ruins of Lindisfarne Priory. If you'd like to receive an email when I post on this blog, sign up under "subscribe" in the right hand column of hte web page. This post originally appeared on the Godspace blog.)

Two related articles you may enjoy: