Stories I ponder: What I learned in Sweden 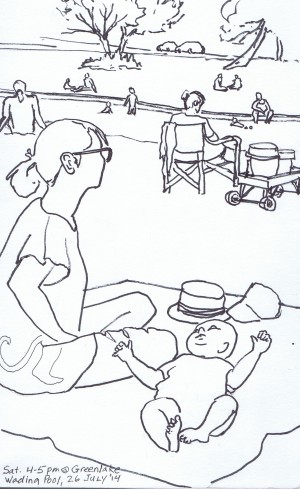 Back in the 1980s, when our sons were 3 and 5, my husband Dave got a fellowship to spend a year doing research in Sweden. He had met a visiting Swedish researcher at the University of Washington Dental School, where Dave was teaching, and that researcher invited Dave to come to Sweden to do research together. We were thrilled at this opportunity.

I was a part time student at Fuller Theological Seminary at the time, and I set up a couple of independent study projects to do in Sweden.

To our great surprise, after we arrived in Linkoping, a town two and a half hours southwest of Stockholm, we found we were eligible for a stipend from the government of about $400 every month because we had children. After we returned to the U.S., I wrote an opinion piece for our local newspaper about how this stipend seemed like such a good idea to me. Everyone got it, no matter what their income, so it was simple to administer. It validated the importance of children in a lovely way, and obviously it helped financially.

We also found out that we were eligible for part-time daycare because I was a part-time student. So, for five hours each day, our boys went to a daycare located on the ground floor of the apartment building where we lived. Our older son was the right age for kindergarten, so for three of those five hours each day, he and about a dozen other children had their kindergarten class in a room attached to the daycare.

The daycare was attractive and well staffed, supplied with toys and art supplies. The bathroom had a cute little cubby for each child with a toothbrush and toothpaste. Dental hygienists came into the preschool to do dental exams and to teach the children about how to care for their teeth.

We paid nothing for the daycare and kindergarten.

At the daycare, our boys made friends with a little Swedish girl named Jenny, and Jenny’s parents invited us over for a meal. They lived in a large apartment building that was a co-housing project, my first experience of co-housing.

Jenny’s mom told me about the 18 month maternity leave she had taken when Jenny was born, mandated by law in Sweden. Most of her leave was paid. She told me about the fact that she and her husband were entitled by law to work two-thirds time for several years after each child was born without losing any advancement at work. She said that government employees were given even more generous conditions in their early years of parenting. Government employees were entitled to work half-time for five years after the birth of each child, without losing the right to advancement.

As you can imagine, I was astounded at all of this. Much later in our time in Sweden, someone explained to me that feminists and people concerned about the rights of women had taken a very different tack in the United States than in Europe, especially Scandinavia. This person explained that in the United States, activists pushed for equal pay for equal work. In Scandinavia, they pushed for things that help mothers (and fathers) and children: free daycare, parental leave, and subsidies for parents.

The older I get, the  more I see examples of the law of unintended consequences. If I had been an activist 50 or 75 years ago, I might have been more concerned about equal pay for equal work rather than benefits for mothers, fathers and children. After all, not all women are mothers. Now I deeply wish that the United States had more structures in place to support parents in the early years of parenting.

God has a special concern for the vulnerable, which includes young children and their parents. “He will feed his flock like a shepherd; he will gather the lambs in his arms, and carry them in his bosom, and gently lead the mother sheep” (Isaiah 40:11). I am so concerned that in the United States, we don’t care for young children and the parents of young children very well. I grieve about this, and I pray for God's mercy for young families.

(Next week: my dad the pilot. Illustration by Dave Baab: our wonderful daughter-in-law and our beautiful granddaughter at one of Seattle’s wading pools. If you’d like to receive an email when I post on this blog, sign up under “subscribe” in the right hand column.

Two years ago on this blog, a favorite post of mine: When fear, ego and ambition drive the bus