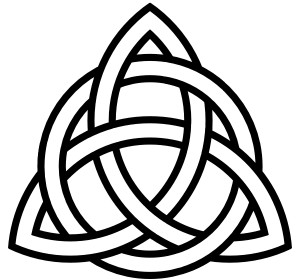 Deeply ingrained in the heart and soul of Celtic Christian spirituality is the mystery of one God in three persons, a truth that is taught clearly in the Bible, even though the word Trinity is not found in Scripture. Three in one; one in three. Esther de Waal writes:

Here is a profound experience of God from a people who are deeply Trinitarian without any philosophical struggle about how that is to be expressed intellectually. Perhaps the legend of St. Patrick stooping down to pick up the shamrock in order to explain the Trinity is after all more significant than we might have thought. It is as though he were saying to those early Irish people: Your God is a God who is Three-in-One and this is most natural and immediately accessible thing in the world. [1]

The image of three in one is found frequently in Celtic art and poetry. Analogies from nature and daily life permeate the Celtic poems about the Trinity:

Three folds of the cloth, yet only one napkin is there,
Three joints of the finger, but still only one finger fair,
Three leaves of the shamrock, yet no more than one shamrock to wear,
Frost, snow-flakes and ice, all water their origin share,
Three Persons in God; to one God alone we make prayer. [2]

Sometimes Celtic poems go on at length about the Holy Three, but some are brief and vivid, like this one:

O Father who sought me
O Son who bought me
O Holy Spirit who taught me. [3]

I wonder if enthusiasm for the Trinity has fallen into disfavor because our generation has such a nigh need to be able to explain and understand everything in a rational way. I can remember as a child being very enthusiastic about the Trinity. In my simple childhood faith, I enjoyed the riddle of one being three and three being one. The Celts’ enthusiasm for this great mystery has rekindled in me a joy and wonder at the great truth that we simply cannot understand everything about God, and we don’t need to.

A personal story about the way Celtic Christianity helped one person: Integration of so many things

My background was Roman Catholic and Assembly of God, and I didn’t know how to marry them. I would go into Bible studies in my Assembly of God church and say, “We should take care of the environment,” and no one would respond. On every subject, I got a lot of answers, but no questions, no mystery. Among Catholics, I would talk about the importance of an active faith that relies on the Holy Spirit, and no one could relate. In both settings, I saw in church life a dichotomy between the physical world and the spiritual world. The Celtic Christians just did not see that split. I found in Celtic Christianity an integration of so many things: care for creation, reliance on the Holy Spirit, the presence of God in everyday life, God being present and real and yet also full of mystery. I get so frustrated that we have lost so much of the unique and balanced Celtic world view.