Worshipping God the Creator: the first post of a series 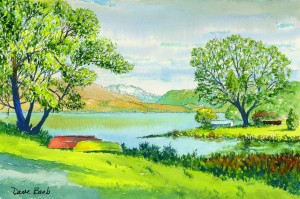 I said to her, “I can really relate to that. I often experience God in nature.”

She replied, “Wait a minute. You’re a Christian. How can you say that?”

I answered, “God created everything. When I look at the world he made, I see it as his handiwork. We can learn something about artists from looking at their artwork, and, in the same way, we can experience something of God in nature. That doesn’t mean nature equals God. It just means it reveals something about God because he made it and sustains it. Because nature is so beautiful, it speaks to me of God’s beauty.”

Christians have often been wary of talking too much about finding God in nature because it sounds like they might be pantheists instead of Christians. Pantheism asserts that God is everywhere; in fact, to a pantheist the universe in its totality is God. Christians believe that God made and sustains the physical world, and God is present everywhere through his Spirit, but God is also separate from creation, just like artists are separate from the artwork they create.

Pastor and writer Gordon MacDonald describes the way his grandmother helped him learn to enjoy birds, trees, animals, and plants, teaching him “the things we were seeing were God’s gift, God’s expression of his character, and God’s artistry.” He writes:

"As I became more acquainted with theology, I began to realize that Grandmother had been teaching me one of the most fundamental truths of the Bible: God had created something out of nothing. That creation reflected a signal part of his nature: order, beauty, energy, growth. I saw that the world was a vast sanctuary where one, stimulated by his or her senses, could be caused to worship and behold a primary revelation of God the Creator." [1]

For many Christians, the physical world is a sanctuary that enables us to praise and worship God.

This is not a new idea, yet it is an idea that was largely lost in the twentieth century church. Over and over again, the psalm writers are moved to adoration and worship because of the splendor of nature. Psalm 33:1-9 calls us to “rejoice in the Lord” and “sing to him a new song” for several reasons: his word is upright, he loves righteousness and justice, and he made the earth. “Let all the earth fear the Lord . . . for he spoke and it came to be” (Ps. 33:8, 9).

The whole creation belongs to God by virtue of the fact that he made it. “The earth is the Lord’s and all that is in it, the world, and those who live in it; for he has founded it on the seas, and established it on the rivers” (Ps 24:1, 2). Everything about it belongs to him: the animals and plants, the stars and planets, even the rhythms of nature. “Yours is the day, yours also is the night . . . you made summer and winter” (Ps 74:16, 17).

The creation helps me put my own life into perspective. “Long ago you laid the foundation of the earth, and the heavens are the work of your hands. They will perish, but you endure” (Ps 102: 25, 26). My own life on earth will end. All the beauty of nature is temporal. Nature itself is definitely not God, because nature will ultimately perish. Only God is eternal.

(This is the first post in a series on worshipping God as Creator, excerpted from my book, A Renewed Spirituality. If you’d like to receive an email when I post on this blog, sign up under “subscribe” in the right hand column. Illustration: "Bright rowboats, Lake Alexandrina," a watercolor by Dave Baab.)