Draw near: Praying about ambition 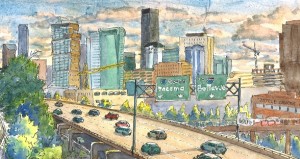 “Every man is said to have his peculiar ambition. I can say for one that I have no other so great as that of being truly esteemed of my fellow men, by rendering myself worthy of their esteem.”
—Abraham Lincoln, age 23, running for his first political office in 1832

Apart from the frustrating fact that people 150 years ago used “men” to refer to people, what do you think about Abraham Lincoln’s words? Is he describing a perspective that is consistent with Christian values because he focuses on developing an admirable character? Is he looking too strongly to people around him to give him esteem?

If you aren’t sure how to interpret Lincoln’s words from a Christian perspective, you’re not alone. Christian views on ambition have shifted a great deal over the past 2,000 years. Presbyterian pastor Adam Hearlson writes:

“Ambition has a complicated history within the church. In his wonderful book Ambition, a History: From Vice to Virtue, William Casey King traces its long history as a social concept. Put simply, ambition has transformed from a categorical sin to a virtue of the powerful.” [1]

In his summary of King’s book, Rev. Hearlson describes some early Christian voices on ambition:

“In the Confessions, Augustine speaks of ‘worldly ambition’ as a primary obstacle in the way of Christian piety. Later he describes humans as inheritors of a libido principandi, a lust for being first. Like other patristic writers, Augustine sees ambition as a pernicious sin. Ambition, in Augustine’s final estimation, inspires a self-centeredness that is antithetical to Christ’s call to seeking God in care and love in the world. Gregory the Great agrees: ‘Avarice is not only a matter of money, but of high standing as well. For it is correctly called avarice when someone strives for loftiness beyond measure.’ Thomas Aquinas is unequivocal in his Summa Theologica: ‘It is evident that it [ambition] is always a sin.’”

A major shift in perspectives on ambition happened when Europeans began to colonize the rest of the world. Rev. Hearlson quotes King: “The harnessing of ambition for colonization redefined it in fundamental ways that would have been unimaginable a century before: as a vice with virtuous possibilities, as a virtue with a dark side.” Rev. Hearlson summarizes this perspective: “By the beginning of the American democratic experiment, ambition held within it a duality—a vice or virtue depending on the context and the person.”

As we examine ambition in our own lives, and try to pray about it, we can see the complexity King describes. Ambition, like so many other attributes, seems to be a two-sided coin, a “vice with virtuous possibilities” or “a virtue with a dark side.” That creates a clear challenge for prayer. We need God’s wisdom, Jesus' model, and the Holy Spirit’s guidance to discern when our ambitions are consistent with God’s will and when they are so self-focused that they damage ourselves and the people around us.

I wrote last week about the fact that my parents’ pressure on me to conform pretty much wiped out all ambition in me. A friend from college told me a few years ago that he remembers me as one of the smartest people he had ever met with absolutely no ambition. This is not unusual for women, as Rev. Hearlson notes: “Scholars like Carol Gilligan and Mary Pipher have thoroughly documented the ways in which the ambitions of girls are discounted, undermined, and rerouted at the earliest stages of life.”

In my adult life, as a follower of Jesus, I have had to learn to access what I really want, what I actually care about, what motivates me and lifts my heart. That took a lot of prayer. I have tried to learn to discern the nudges of the Holy Spirit, which also requires a lot of prayer. For people whose ambition has been repressed and undermined for any reason, rediscovering the virtue of aspiring and working toward goals requires conscious thought and prayer.

The word “ambition” appears five times in the New Revised Standard translation of the Bible, all of them in New Testament epistles. The Apostle Paul says he makes it his ambition to proclaim the good news (Romans 15:20), using a Greek word that can also mean aspire or strive. In the other four mentions of ambition, the NRSV uses “selfish ambition” to translate a different Greek word, which can also mean “self-interest.” These two Greek words illustrate the challenge we have in talking about ambition. Surely we need to ask for God’s help to strive for what we believe to be right and good, as Paul did when he passionately embraced his calling to proclaim the Gospel to the Gentiles. And surely, in all we do, we need to pray to be motivated by something different than selfish ambition and self-interest.

(Next week: Praying about what we are looking for. Illustration by Dave Baab: downtown Seattle in 2020 at the height of the pandemic with light traffic on Interstate 5. If you’d like to receive an email when I post on this blog, sign up below under “subscribe.”)

[1] All quotations in this article, except the quotation from Abraham Lincoln, come from “Ambition used to be a vice” by Adam Hearlson, The Christian Century, May 4, 2022, pages 32-34.