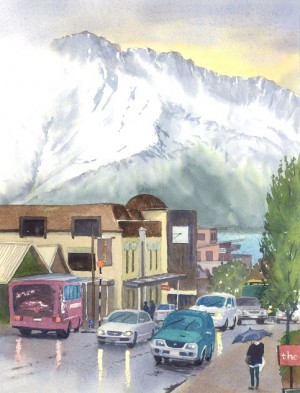 Some years ago we offered at class at our church on the book, Rich Christians in an Age of Hunger, by Ronald Sider. In the 1997 revision of the book, Sider makes many connections between world poverty and environmental degradation, because it is usually the poor who suffer the most ill effects from the impact of pollution. About six months after the class, one woman who had attended told me about the great impact the class had on her.

Before reading the book, she had no idea of the extent of world poverty or its connection to pollution. After the class, she prayed a lot about how to respond. God led her very clearly to take the bus to work two days a week instead of driving, as she had been doing. She figured out that by taking the bus she saved 2500 miles a year of wear and tear on her car, which reduces both pollution and the carbon emissions that cause global warming. She had to change busses in downtown Seattle, and she found that she often bought birthday cards and other small items downtown as she waited for her next bus. This saved her additional miles she would have driven on her car. She could read and pray on the bus, which proved to be a big bonus.

What struck me the most about my conversation with her was her joy. She had learned about God’s care for the poor and for the earth, she had prayed about it, and God had led her to do something that reduced pollution and freed up money, which can be given away. Riding the bus wasn’t something she felt she ought to do. It was something she wanted to do because God led her to do it. It was an act of devotion to God, a way to embrace God’s priorities in the world. It had meaning to her because it connected her to God’s priorities and her own values.

So many people in recent years have talked to me about the movement in their lives towards experiencing each moment as a gift from God, truly being present to the grace in the small things of life. This involves appreciating the people we are with, paying attention to what we are doing, and noticing the blessings of warmth, beauty, and tenderness when they occur in people or in nature. Many people call this attitude “mindfulness.”

To the extent that we embrace consumerism, we are forced to speed up the pace of our lives in order to earn more money to support our lifestyle. We also have to take the time to care for all our possessions. Voluntary simplicity enables us to slow down and experience spaciousness of time and place. Simplicity can help us live more mindfully.

A best-selling writer on simplicity, Cecile Andrews, talks about the fact that our sense of scarcity makes it hard for us to be mindful. We are anxious about time and money; we worry that we won’t have enough of either. Our fear of scarcity impacts our whole life and makes us move quickly and frantically. She writes:

To live mindfully, to appreciate your time, you have to move slowly. There’s nothing more difficult for Americans, and we have gotten worse in the last twenty years. Court reporters find that we talk faster. We walk faster, our movies are faster. MTV is the perfect example. Just when you start to focus on an image, the camera moves on.[1]

Those words were written 17 years ago, when MTV was fairly new. Just think how much faster images move today. Andrews advocates saying the words, “slow down,” almost as a mantra, and she believes that slowing down and practicing mindfulness is a prerequisite for developing an attitude of thankfulness.

This is the eighth post in a series on worshipping God as Creator. Earlier posts:
Nature calls us to worship
The Creation invites us to join in praise
The Bible and Creation
Some thoughts from midlife interviews
The good creation
Creation care
Voluntary simplicity

(Next week: "Bill's story." This post is excerpted from my book, A Renewed Spirituality. Illustration: Winter day in Queenstown by Dave Baab. If you'd like to receive an email when I post on this blog, sign up under "subscribe" in the right hand column.)