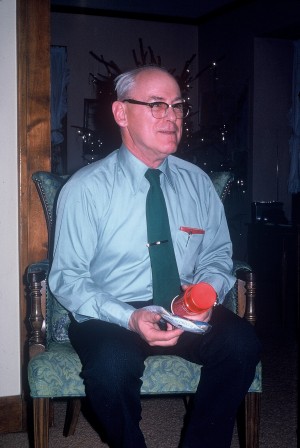 Dave’s dad, Hubert, was born in 1913 and had some rough years. Soon after the depression started, his mother died, and his father fell into alcoholism and stopped providing for Hubert and his brother. The two teenagers left their home in Ohio, rode the rails to Iowa, and found work on a farm. Later they returned to Ohio and found jobs at a machine shop.

Over the years, Hubert became a self-taught engineer. In the later years of his working life, he designed expandable vehicles like bookmobiles. Because of his lack of formal education, he watched younger, better educated people advance above him in the company. He didn’t get the raises they did, and Dave’s mother was very worried about retirement. That’s a major part of what the arguments were about.

Hubert became a Christian in his late thirties. Dave remembers that when his mother would yell about money, Hubert would always answer, “God will provide for us.” He had some basis for those words. The owner of the company had always promised Hubert that he would take care of Hubert.

Hubert retired at 65 in the late 1970s, and a couple of years later the owner of the company died. In his will, he left Hubert $100,000 of stock in the company. Shortly afterwards, the company was sold, and stock holders received four times the previous value of their stock. Hubert used part of the money to build a modest house, and he invested the rest in the stock market. He enjoyed the market run up in the 1980s and early 90s.

When Hubert died in 1996, Dave and his siblings inherited more money than they could have imagined from a man who never graduated from high school. That money has given us freedom to do many things we wouldn’t have done otherwise. I am deeply grateful for the many ways our life has been easier because of our inheritance from Dave’s dad.

I ponder this story so often because it bugs me, and I can’t entirely figure out why. I should be saying, “Hey, look, Hubert trusted in God, and God rewarded that trust.” And a part of me does believe those words.

But another part of me chafes. Maybe it’s the contrast with my own upbringing in the area of money. My dad was in many ways the opposite of Hubert. My dad attended church, but in his financial dealings he trusted in his own competence with money management. My brother and I were taught from an early age how to manage money. Maybe the story bugs me because I trust in my own competence too much and God’s provision too little. I hope that’s not the case.

Maybe the story chafes because I have been very influenced by the opening chapters of Nehemiah. In the face of obstacles in rebuilding the wall around Jerusalem, Nehemiah says this: “So we prayed to our God, and set a guard as a protection against them day and night” (Nehemiah 4:9). They prayed and they acted. I believe that’s what we’re usually called to do, some combination of prayer and action. So maybe I resist Hubert’s seeming passivity about money before he received the inheritance from the company owner. Maybe “God will provide” doesn’t feel like enough to me. Maybe I wish Hubert had been able to express what he was doing to save for retirement as well as trusting in God.

Maybe I resist miracle stories that seem too simplistic, because they set up an expectation that life in Christ will be filled with miracles that always make our lives sunny and bright.

Or maybe the story reminds me of a little boy lying in bed at night feeling scared, and I hate knowing Dave suffered that way.

Despite writing this blog post and pondering Hubert and money yet one more time, I still don’t know why the story bugs me. Maybe my musings about it will trigger some helpful thoughts in you about money or miracles.

(Next week: My mom and her sister’s death. Photo of Hubert Baab in 1974. If you’d like to receive an email when I post on this blog, sign up under “subscribe” in the right hand column.)

One year ago on this blog, a post that got a lot of feedback on the blog and on Facebook – Quotations I love: Fear and regret are thieves.