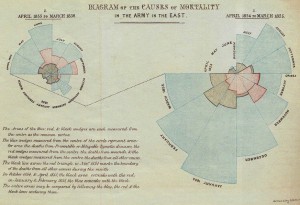 Later, when I began to love learning about places, I associated her with being a nurse during the Crimean War (1853-1856). I found the place Crimea quite interesting, a funny shaped peninsula in the Black Sea, northeast of Istanbul, now contested land claimed by both Ukrainians and Russians.

This month’s Smithsonian Magazine has a cover article on Florence Nightingale in honor of the 200th anniversary of her birth on May 12. The cover of the magazine has this title: “The Defiance of Florence Nightingale” and a list of three characteristics: “fierce reformer, pioneering statistician, and bold iconoclast.” [1]

Of that handful of words use to describe her on the magazine cover, the only one that connects with my lifelong knowledge of her is “bold.” I thought of her as brave, and bravery and boldness aren’t all that that different. But the other words stunned me. I found myself staring at the cover for a long time. Fierce reformer? Really? What did she reform? Bold statistician? Why did no one tell me about that part of her life? I wrote two weeks ago about feeling so out of place for loving math in high school. After I read the article, I found myself asking, why didn’t anyone give me some encouragement using Florence  Nightingale as a model? Why didn't anyone talk about her interest in research and statistics?

My son, who writes using the name Michael Hobbes, is the co-host of a podcast with another journalist, Sarah Marshall. Their podcast has gotten a lot of media attention in the past year, and they have lots of listeners. They call it “You’re Wrong About,” and they focus on events in the past 50 years that we never really heard the truth about. When I read the article about Florence Nightingale in the Smithsonian Magazine, I felt like I was listening to one of their podcasts.

What was I wrong about? What surprised me in the article?

1. Many nurses are tired of having Nightingale held up as a model for nursing, and scholars disagree about some of the things she is said to have done. There is a lot more controversy about her than I realized.

2. Nightingale felt a call from God at age 17, and it appears that her focus on improving hospital care came from her Christian faith.

3. She was a forceful leader, serving as a trainer and manager of  nurses during the Crimean War. She was often at odds with the military hierarchy. She was not at all a stereotypical nurse with a kind heart and gentle, retiring manner.

4. She was very concerned about the reasons soldiers died in the Crimea. She partnered with a statistician to study causes of death, and found that many aspects of the care in military hospitals related to hygiene needed changing.

5. She pioneered the use of creative graphs and charts to communicate her findings. (See illustration above.)

6. After she returned to England, she continued to study death rates in English hospitals, and she continued to use statistics to make her arguments. She was instrumental in changing hygiene practices in English hospitals until the end of her life (1910). The Smithsonian article says, “Swayed by her presentations, the military improved hospitals throughout Great Britain, and Parliament voted to finance the first comprehensive sewage system for London. ‘She was a one-woman pressure group and think tank,’ says David Spiegelhalter, a University of Cambridge statistician and author.” [2]

Imagine a woman in the nineteenth century being a “one-woman pressure group and think tank.” Maybe historians wanted to recognize her role in reforming patterns of hygiene in hospitals and bringing a sewage system to London, so they kept her name in front of us, but neglected to tell us about the ways that she didn’t fit the patterns of gender at the time. And maybe I heard “nurse” and made assumptions about what Florence Nightingale’s work actually looked like.

International Women’s Day was last Sunday, and I am grieving that I never knew the ways Florence Nightingale could have been a model for me as a teenager and young woman, when I struggled to figure out who I was and who I could be.

Next week: a spiritual diary of life is isolation: weeks 1 and 2. Because my husband, Dave, has a chronic lung disease, we have chosen to practice isolation in the light of the two dozen deaths in the Seattle area from the covid-19 virus. I am trusting that God will bring gifts to us in this very strange time, and I’m going to be writing about those gifts, along with the challenges. Illustration: “Diagram of the causes of mortality in the army of the East 1854-55” by Florence Nightingale. [3] If you'd like to sign up to receive an email when I post on this blog, see below.

I've had two posts recently on the Godspace blog related to their theme "the heartbeat of God and the rhythm of eternal breath." The first post focuses on breath prayer. In the light of the covid-19 pandemic, we could all use breath prayer as a way to pray for people whose breath has been impacted by the virus. My second recent Godspace post focuses on creative prayer for creation care.