Stories I ponder: My dad the pilot 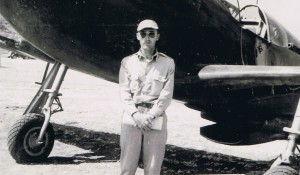 My father was born on April 25, 1915, the day the Australia and New Zealand Army Corps landed at Gallipoli in Turkey. The military action there over the next six months would be so inept and bloody that on my father’s first birthday, April 25th would be declared a national holiday in New Zealand. ANZAC Day is still celebrated passionately in New Zealand, and people with no religious affiliation enthusiastically attend worship services commemorating New Zealand’s soldiers.

Of course, I had to move to New Zealand to learn the significance of my father’s birth date. It seems an appropriate day to be born for someone who flew fighter planes in World War 2. My dad flew P-51 Mustangs in North Africa and Italy for about a year before he became very ill with what was then called jaundice, some unspecified form of hepatitis. After returning to the U.S. to recover, he spent the rest of the war selling war bonds and training pilots. When the war ended, he left the military, but returned to the air force a couple of years later.

My parents met in Washington, D.C., when my father was stationed at the Pentagon. In 1948, he was transferred to Sofia, Bulgaria. My mother waited nine months to get a visa to join him. They were married in Bulgaria, spent a year there, and when Bulgaria severed diplomatic relations with the United States, my dad was transferred to Ankara, Turkey. My mother was pregnant with me when he was again posted to the Pentagon. After I was born, my father was stationed in Greece, Germany, Michigan, upstate New York, Germany again, and Virginia. My younger brother was born when we were in Germany the first time and I was almost four.

In all those places up through Germany the second time, my father flew cargo planes for the air force. My favorite memories include my father returning from a flight, pulling out a map and showing me where he’d been. Sometimes he brought me little presents, which I loved, but those moments with the map were just as precious as the gifts.

When I was nine, my father quit flying because he had reached the mandatory age for stopping.

My father died in 2005 at 90. My mother asked my brother, Mark, and me to give a little talk at his funeral service. When Mark and I compared notes about what we were going to say, I found out that Mark did not remember my father in his pilot years at all.

I have loved maps all my life. I love them on paper and I love them online. My father gave me that gift. That love of maps and distant places motivated me to study for a year in France at 19, and live in Iran, Israel, Sweden and New Zealand with my husband, Dave. God used those conversations with my father over maps to kindle something significant in me that profoundly shaped my life and ministry.

We are shaped by the events in our lives, and it is remarkable that a brother and sister growing up in the same home can have such different memories. Even when people experience the same events, they can remember them so differently.

I’ve been writing a series of blog posts about stories I ponder. All of these stories have shaped me in one way or another. I have LOVED writing these stories. Writing down these events that shaped me has helped me see God’s hand in my life in new ways.

I want to encourage each of you to think about the events that have shaped you. Maybe you could journal about them, talk to a friend or family member, or allow time in a small group meeting for people to share stories.

Here are the key questions:

We must make spaces to share these kinds of stories.

(Next week I begin a new series on prayer as listening to God. Photo: my father during World War 2. If you’d like to receive an email when I post on this blog, sign up under “subscribe” in the right hand column.)

The posts in this series about stories I ponder:

What I learned in Sweden
How I learned about introversion and extraversion, and why it matters
The high cost of pretending to be someone we’re not
Dave’s sister’s end of life
How I changed my mind about women in ministry
We are necessary and superfluous
My mother and her sister
My father-in-law and money
A tale of two grandmothers
Aunt Lynn
The noisy washing machine
The tulip