Grief AND thankfulness in the story of the ten lepers 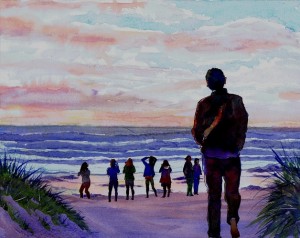 As a young adult, I disliked the story of the ten lepers in Luke 17:11-19. I read it as describing one more thing we should do. I had been raised with an enormous list of “shoulds,” and I had found freedom in the Gospel of Jesus Christ. A life-changing book of the Bible for me as a young adult was Galatians, where the Apostle Paul lays out so clearly that we are free from the demands of the law.

Even in my forties and early fifties, when I discovered the power of thankfulness (which I wrote about here), the ten lepers was a story that didn’t resonate very much with me. It wasn’t until I read Gratefulness, The Heart of Prayer by David Steindl-Rast that I understood something significant.

That one leper isn’t presented to us as a model for something we should do. No, that one leper was really blessed by going back to thank Jesus. The leper received a gift because of his thankfulness.

The leper who said thank you to Jesus built a connection with Jesus. We have no idea if that was the leper’s intention. The story, like most stories in the Gospels, is pretty cryptic. When I read the story through the lens of Steindl-Rast’s notion that thankfulness affirms relationship, I can imagine what happens in the future. Because this one leper has connected with Jesus as he gave thanks, the next time Jesus comes to his village, he would feel the freedom to approach Jesus and tell him how things were going for him. I like to picture his relationship with Jesus flourishing even further.

For the past ten or fifteen years, I’ve been viewing the story of the ten lepers through this lens of relationship building. But now, as I’m exploring grief AND thankfulness, I see some more aspects of the this story. I wrote last week about the ways grief is built into one of my favorite passages about thankfulness, Colossians 3:12-17. I see grief built into the story of the ten lepers in similar ways.

I grieve that leprosy is such a contagious disease that people with leprosy in Jesus’ time had to live outside their villages, cut off from family and friends. I grieve that lepers were treated that way in many parts of the world until recent times and maybe are still treated that way in some places. I grieve that the social isolation for these ten lepers had probably damaged them in profound ways. Their reentry into village life may have been very challenging for them.

I grieve that so many healings involve great challenges for the person who is healed. Oliver Sacks, the neurologist who wrote fascinating books, tells the story of a blind woman who recovered her sight and found the world so overwhelming she wished she could be blind again. The book where he tells her story is called An Anthropologist on Mars: Seven Paradoxical Tales, and the use of the word “paradoxical” in the subtitle exactly captures this strange phenomenon – some people don’t really want to be healed, some people don’t enjoy having been healed, and many people who have been healed find great challenges in living a different style of life. I grieve about all of this, and I grieve for the small ways I have experienced this reality in my own life.

In a year filled with grief AND thankfulness, I am loving exploring so many connections I’ve never seen before. For my American readers, happy Thanksgiving, and may you make room for grief even as you are embracing and expressing thankfulness. I am learning the two can co-exist in helpful ways.

Next week: another scripture I’ve been pondering. Illustration by Dave Baab. I love getting new subscribers, who receive an email when I post on this blog. Sign up below.

In honor of American Thanksgiving, here are some past posts about thankfulness: