First post in a new series: The friendship skills of asking, giving and thanking 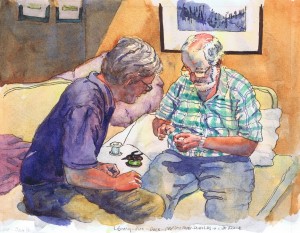 Daniel, in his sixties, was raised with notion that men are supposed to be independent and strong, able to meet their own needs. He jokes that the Simon and Garfunkel song, “I am a rock, I am in island” summarizes the philosophy of manhood he learned as a child. In his childhood, the stoicism encouraged for men spilled over to all of his family life. Even his mother was afraid to acknowledge weaknesses or needs. The shame of needing someone’s help was very strong.

People have told Daniel that asking others for help can be a way to build intimacy. He has found it difficult to act on that idea, but he has tried. He can see that the extreme self-reliance of his parents wasn’t good for them or for their children because it resulted in isolation and alienation from neighbors and family members.

Daniel volunteers with an international student ministry at the local university. The small group of students decided they would like to hold a retreat over spring break. As Daniel was praying about the possibility of holding a retreat, he remembered that a couple he knew from his church had a holiday cottage. He wondered if perhaps they might be willing to loan the cottage to the student group for the retreat.

He didn’t know the couple well, but he got up the courage to ask about the cottage. They were enthusiastic about the idea, and asked Daniel and his wife to meet them at the cottage for lunch a couple of weeks later.

Friends ask for all sorts of things: help with physical projects, a listening ear when times are tough, prayer support in the midst of challenges, companionship in activities, a few moments to brainstorm possible solutions to a problem, and many other things. The give and take of asking and receiving is an integral part of friendship.

Why is asking so hard for so many people? I have observed that the most isolated people often have a hard time asking for help.

Daniel’s story illustrates the impact of the “rock and island” philosophy of being a man. “What’s wrong with you that you can’t figure it out on your own?” These words float around in Daniel’s head when he considers asking for help. The pride of being self sufficient is a strong motivator for many men, and it influences many women as well.

In fact, Daniel’s mother experienced as much, if not more, shame than Daniel’s father when she had needs. She found it excruciatingly difficult to ask for help or acknowledge a weakness. She experienced a major health crisis without telling her family members. When they found out about it many years later, they were stunned that she had not been able ask for support and encouragement in the midst of a medical challenge that could not possibly have been considered to be her fault. She died a lonely, isolated woman. Her inability to acknowledge her need for help played a significant role in her isolation.

Pride in self sufficiency and shame in asking for help are two major forces that make it difficult to admit we have needs. In addition, we may fear that our friends are too busy to help or have too many struggles of their own. We don’t want to impose on people who are already stretched. We don’t want to be a burden.

This post is excerpted from my book, Friending: Real Relationships in a Virtual World. To learn about what the book covers, look here. I have several boxes of the book and I am hoping to sell them at low cost to people to use in groups. Every chapter ends with discussion questions, and numerous groups have used the book and told me it generated great discussion.