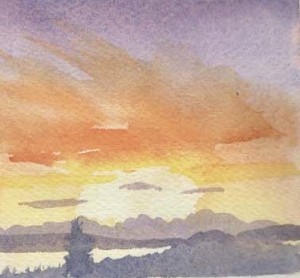 In the West of the United States these hot summer days, fire is terrifying. Here in Seattle, the winds have blown from the west for several weeks, so the smoke from the fires in Eastern Washington is blowing away from us. My friend in the Minneapolis area, however, is dealing with the kind of smoke that we’ve had many recent summers in Seattle, and that we will have when the wind changes. The smoke around Minneapolis, my friend tells me, is coming from fires in Canada to the northwest of them.

Yet despite its enormous destructive power, fire as a tool shaped human life. Fire enabled early humans to cook meat, which gave them more protein and allowed their brains to thrive. Early humans used fire to heat rocks, which enabled our ancestors to make sharper tools. Fire provided warmth during the Ice Ages, so that humans survived extreme cold. In Jesus’ time, fire was essential for cooking, warmth, and light.

Given the fact that fire is both a vital human tool and a violently destructive force, I find it interesting that on the Pentecost after Jesus’ death and resurrection, tongues of what appeared to be fire appeared over the heads of the disciples. We often talk about “tongues of fire,” but the many translations of Acts 2:3 make clear that the tongues above the disciples looked like fire. The NRSV translates Acts 2:3 like this: “Divided tongues, as of fire, appeared among them, and a tongue rested on each of them.” Here are some other translations:

Given the varietyof translations available to access on Bible Hub (one of my favorite resources), it’s clear that Luke describes these things that appeared over the disciples’ heads as resembling fire. Whether the tongues were really fire (apparently not) or resembled fire (most likely), I still find it thought provoking that fire was evoked at this moment when the disciples were empowered the spread the Gospel throughout the world.

I also ponder the word “fiery,” used to describe passionate people and people who get angry easily. I was considered to be fiery as a teenager, a characteristic my parents encouraged me to suppress as much as possible. When I became a committed Christian at 19, for the first time in my life I had glimpses that my passionate personality might actually be welcomed and valued by God.

Passionate emotions give us the power to keep serving, loving, working for justice, and striving for God’s kingdom values. In fact, twice in online definitions for “fiery,” I found “spirited” as a synonym. Christians are called to be “Spirited,” in the sense of being filled with the Holy Spirit. How much does being Spirit-filled involve being fiery and spirited?

For me personally, the Holy Spirit has disrupted my blind acceptance of my parents’ values, so deeply rooted inside me. Through a life-long process of transformation, the Holy Spirit has helped me grow increasingly confident that God made me the way I am and delights in those moments when my fiery passions are focused on God’s kingdom work – ignited by the holy fire of God’s Spirit.

For all of us, the picture of tongues that look like fire on Pentecost raise questions about the unpredictability yet usefulness of fire, its power to make our lives better, yet its tendency to flare out of control so easily. So here are some questions for you: In what ways has the Holy Spirit disrupted your life in ways that are like fire? In what ways could you be more open to the Holy Spirit’s presence like fire in your life?

Next week: confession/admission of sin. Illustration by Dave Baab. I love getting new subscribers. Sign up below to receive an email when I post on this blog.

Some earlier posts on the Holy Spirit: