A Cat with a Noble Character 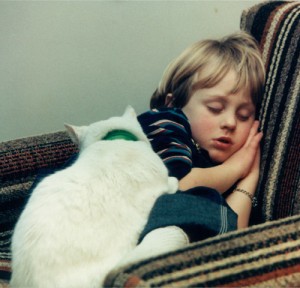 Our older son, Jonathan, was two weeks short of one year old when we got a cat. She was all white, so we called her Vanilla. She was also about one year old. She was a wonderful cat for toddlers. Jonathan was so eager to have a relationship with her, and he would try to be gentle, but in his eagerness to relate to her, he would sometimes hurt her. She would walk away two feet and sit there, as if to say, “Hey, don’t hurt me. But if you want to keep trying to pet me, I’m here.” She seemed to know she and Jonathan were age mates, and that they would be important to each other in the future.

By the time Jonathan and Vanilla were three, they were best friends. She always slept with him, and he took such pleasure in her. When they were six, we got a second cat, black with hints of red in her fur. We called her Tiwi, and Vanilla welcomed her. During the day, they slept together curled around each other, but at night, Vanilla slept with Jonathan. Sometimes Tiwi joined her.

Whenever we had friends over for dinner who had small children, Tiwi would disappear, but Vanilla would stay there and let the kids pet her and play with her. Whenever they hurt her, she would walk away about two feet, still seeming to say, “Please don’t hurt me, but I’m willing to let you try again.”

As Vanilla got older, she loved to sleep in the sun. On cool days, she still slept curled around Tiwi, and on sunny days, she wanted to go outside and find a patch of sunshine. We learned later that white cats have white skin, and much like humans with fair skin, white cats are susceptible to skin cancer. When Jonathan and Vanilla were 14, she got a malignant melanoma on her nose. The vet told us there was nothing we could do about it, and as the months passed, the cancer ate away her nose.

When the time seemed right I took her to the vet to be put to sleep, and I took Jonathan along. I think it was right to take him with me, but I still agonize when I remember that he cried and cried and cried as she died.

I dreamt about Vanilla the other night, and I woke up overwhelmed with sadness that the lifespan of cats and dogs is so much shorter than the human lifespan. I can imagine someone might say, “She was only a cat.” No, she was a noble beast, and her love and patience reflected something important about her Maker.

A note a few days after this post: A friend gave me a link to a song by Benjamin Britten called "For I will consider my cat Jeoffry," from "Rejoice in the Lamb." Some of the words go like this: "He is the servant of the living God . . . he worships in his way . . . for he knows that God is his savior, for God has blessed him with the variety of his movements."