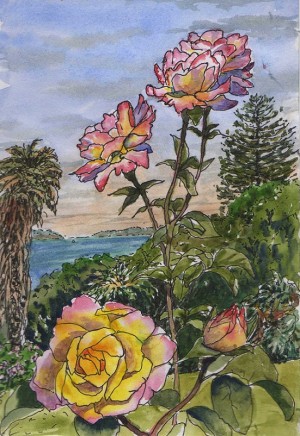 “Drafty” is an understatement. The house we rented for the first six months was 100 years old, and the windows had so many gaps that we could lie in bed at night and watch the curtains blow in the breeze – with the windows closed. I have never been so cold during the winter inside a house. The house had other merits – an efficient kitchen (with a wood stove that heated the room very well), a nice piano and a gorgeous view of the ocean. As the spring months flowed by and the flowers bloomed, the house became marginally more comfortable. In late November, we had a day that was 30 degrees Centigrade (86 degrees Fahrenheit). I’ve never been very enthusiastic about hot weather, but that day felt like an extravagant blessing. I soaked up every minute. December, however, still had a lot of chilly, windy days.

But the light was amazing. I am convinced that the hole in the ozone, which makes sunburn happen so fast in the Southern Hemisphere, makes the light brighter. In Dunedin in December, the sky has light in it until 10 pm. I would read for a couple of hours before bedtime every night, sitting in a chair with a view of the ocean. I watched the light play on the water, the shimmery colors changing every few minutes. The length of the days, and the brightness of the light, spoke to me about the Light who has come into the world in blazing abundance, reflecting the glory and wonder of heaven.

One of my friends in Seattle pitied me deeply. She loves candles at Christmas, that feeling of nestling at home during the dark evenings. The image of the Light shining in the darkness speaks to her of the miracle of Christ’s coming. The small candle flames reflect so much of what we experience of God’s presence in our daily lives. So much darkness all around us, yet the constancy of God’s small but certain presence with us.

But what if we viewed the incarnation as a glimpse of the amazing glory of God, here with us on earth? What if we were able to see into heaven for a few minutes, knowing that in Christ the full glory of God is revealed? What if one of Jesus’ names, the Light of the World (John 8:12), was demonstrated to us in blazing, abundant power at Christmas? That’s how I perceive the long days and the beautiful light at Christmas in New Zealand.

“What has come into being in him was life, and the life was the light of all people. The light shines in the darkness, and the darkness did not overcome it” (John 1:3-5).  My friend sees this verse represented in candles shining in a cozy room on a dark night. I see this truth represented in long nights with amazing light that lasts hour after hour, reflecting off water and sending luminous colors onto the hills. This blazing light lifts my heart with its glory and abundance, and speaks to me of the overwhelming wonder of God’s glory, brought to us in Jesus and made real to us through the power of the Holy Spirit.

The heavens are telling the glory of God;
and the firmament proclaims his handiwork.
Day to day pours forth speech,
and night to night declares knowledge.
There is no speech, nor are there words;
their voice is not heard;
yet their voice goes out through all the earth,
and their words to the end of the world.
In the heavens he has set a tent for the sun,
which comes out like a bridegroom from his wedding canopy,
and like a strong man runs its course with joy.
Its rising is from the end of the heavens,
and its circuit to the end of them;
and nothing is hidden from its heat.
—Psalm 19:1-6

At Christmas in the Southern Hemisphere, which I will get to experience this year for the first time since 2016, I experience the long days pouring forth speech about God’s glory, “their words to the end of the world.” I experience the sun running “its course with joy.” This light is brought to earth in Jesus Christ.

Praise God that nature speaks of God, whatever climate or hemisphere we get to experience in Advent and at Christmas. May God feel near this Advent. May God speak to you through nature. May the light from candles or the sun remind you that Jesus is the Light of the world. May God give you a glad heart because the Light has come into the world in Jesus.

(Next week: Advent and Christmas in the Southern Hemisphere – the human body. Illustration by Dave Baab: Roses in Auckland at Christmas. I love to get new subscribers. If you’d like to get an email when I post on this blog, or if you used to get an email but you aren’t getting one any longer, sign up below under “subscribe.” Some subscribers got lost in the transfer to a new notification system for subscribers.)

Last month I had the privilege of being a guest on a podcast hosted by a friend of mine, Lance Lukin, who is a chaplain to seafarers. The two episodes are here: