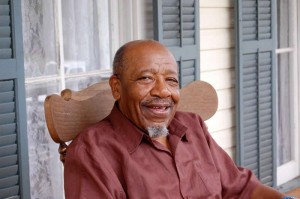 One of the adults who went along on a church youth group mission trip told me an amazing story. The Seattle youth group went to Mississippi in July to spend a week learning about racial reconciliation. Each morning, Dr. John M. Perkins spoke to the group about Christian perspectives on reconciliation. Dr. Perkins is an 85-year-old civil rights leader who has received an astonishing 13 honorary doctorate degrees for his work.

On the first and second mornings of the youth mission trip, Dr. Perkins gave an overview of racial reconciliation to the group. Both mornings, as an aside, he mentioned how deeply disturbed he was by the recent Supreme Court decision about gay marriage.

The views on gay marriage in the youth group covered the entire spectrum. Some of the teenagers were glad that Dr. Perkins reinforced their views, but others were quite offended by his words, and the adult leaders of the trip spent time talking through the issue with those students. On the third day, two of the adult leaders – Scott Gronholz, the youth pastor and Lynne Blessing, the church missions pastor – talked with Dr. Perkins about what was going on in the group, simply to encourage him to avoid the topic of gay marriage for the rest of the week.

Here’s what happened next, as described by Scott, the youth group leader, in a church newsletter article:

On Thursday morning Dr. Perkins’ words altered the entire trip for the better and probably altered the lives of everyone in the room. Dr. Perkins sat down and read from 1 Timothy 1:15 which says, “Here is a trustworthy saying that deserves full acceptance: Christ Jesus came into the world to save sinners—of whom I am the worst.” He then slowly lifted his gaze to us and gently yet deliberately said, “I have sinned this week.” There was an audible gasp from the audience and the energy in the room instantly transformed. I don’t know how to describe what it felt like. I can only say that the room suddenly felt Holy; like the presence of the Holy Spirit was instantly palpable and something special and important was happening. Dr. Perkins proceeded to spend the next 45 minutes apologizing to our group. He said that he had vowed early in his life to be an instrument of love and that he had not done that on this trip. He said that he was sorry and that he needed our forgiveness. To be clear, throughout his entire talk he never once said that he was changing his opinion on gay marriage or that he felt sorry about his convictions and interpretation of scripture. He did humbly admit that the Supreme Court decision was a paradigm shift and that he has inadequate language to talk about it. Finally, he got on his knees in front of us and again asked for forgiveness. He then said that he was going to broaden his ministry to emphasize reconciliation for all people and not just different races. He said that this next phase of his ministry was going to take a lot of work and asked us all to pray for him. At that point he laid flat on the ground and asked us to lay hands on him, which of course we did.

Dr. Perkins listened. He paid attention to the report of how his words affected the teenagers. He repented. But remember, he didn’t repent of his view on gay marriage. He didn’t change his beliefs about it. He repented for the way his expression of his opinion had offended others.

By listening, he learned that expressing his views had made some of his guests uncomfortable, and in the context of host he believed that was unacceptable, so he needed to ask for forgiveness. Scott described the significance of this moment: “John Perkins showed us a path towards real and authentic community where, while there may be disagreement, division and disunity don’t have to be the end of the story.”

One of the biggest obstacles to listening is the fear that if we understand another person’s point of view, we will have to adopt it. Dr. Perkins demonstrated the kind of listening that is deeply concerned about harmony between people who may continue to have different convictions on a subject but who can still experience unity.

I wrote an article about the kinds of inner noise that impede listening, including the fear that if we acknowledge or understand another person’s point of view, we will have to change our own beliefs. This fear of listening and understanding is very real and impedes loving relationships in so many ways.