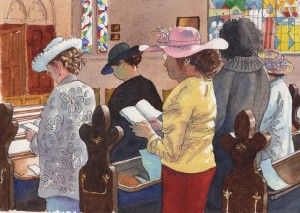 On his last night with his disciples before his death and resurrection, Jesus said,

“This is my commandment, that you love one another as I have loved you. No one has greater love than this, to lay down one’s life for one’s friends. You are my friends if you do what I command you. I do not call you servants any longer, because the servant does not know what the master is doing; but I have called you friends, because I have made known to you everything that I have heard from my Father. You did not choose me but I chose you. And I appointed you to go and bear fruit, fruit that will last, so that the Father will give you whatever you ask him in my name. I am giving you these commands so that you may love one another.”

Jesus calls us his friends! For some reason, on that day, the impact of that statement stunned me. I sat in my rented car in the cold wind, watching the pounding waves, pondering the significance of this invitation to friendship.

Friends have a level of equality with each other, and Jesus affirms that he can call us friends because he has revealed what his Father is doing, so we’re not in the dark about God’s purposes and plans. Yet this friendship is characterized by obedience as well. We are commanded to obey Jesus, but the command here is really more of an invitation. Jesus invites us to enter into this new thing that the Father is doing and that Jesus is making known.

In fact, Jesus invites us into the friendship he has with the one he calls Father. My two aha moments are connected to each other. We are created in the image of a God who lives in love: the three persons of the Trinity eternally intimate with and devoted to each other. That love spills over to us. We are loved, and we are called to love. We are invited into friendship with this God, and Jesus Christ is the one who makes that friendship possible by dying, and being raised from the dead, to reconcile us to God.

(Next week: Friendship with Christ and friendship with others. Illustration by Dave Baab. If you’d like to receive an email when I post on this blog, sign up under “subscribe” in the right hand column. This post is excerpted from my book, Friending: Real Relationships in a Virtual World.)

Happy New Year! Here are some New Year’s posts I’ve written in the past to help readers reflect on the transition from one year to the next.

Two postures for entering into the New Year
Jesus’ model of hearing God’s guidance
Prayer as listening to God: Looking back on the past year
How to use the prayer of examen to look back on the whole past year (a post I wrote for the Godspace blog)