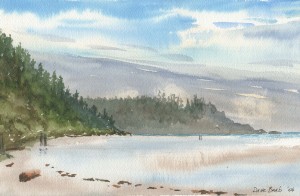 When we think about the ways God speaks through nature, a key passage is Psalm 119:1-4:

“The heavens are telling the glory of God;
and the firmament proclaims his handiwork.
Day to day pours forth speech,
and night to night declares knowledge.
There is no speech, nor are there words;
their voice is not heard;
yet their voice goes out through all the earth,
and their words to the end of the world.”

The first verse tells us the content of the words: the glory of God. The remaining verses describe the nature of the speech. It goes spreads to the end of the earth, speaking without words or audible voice.

What do the speechless words say? That God has glory? Anything else about God’s glory?

Romans 1:19-21 is the second key passage related to this topic. “Them” in the passage refers to “those who by their wickedness suppress the truth” (verse 18).

“For what can be known about God is plain to them, because God has shown it to them. Ever since the creation of the world his eternal power and divine nature, invisible though they are, have been understood and seen through the things he has made. So they are without excuse; for though they knew God, they did not honor him as God or give thanks to him, but they became futile in their thinking, and their senseless minds were darkened.”

So the heavens (from Psalm 19:1) and all things God has made (Romans 1:20), speak of God’s eternal power and divine nature. The Romans passage makes clear that these attributes of God are invisible, yet they become visible in the things God has made. What is the appropriate response to what is revealed through the creation? Honoring God as God and giving thanks to God (Romans 1:21).

I’ve been writing about the ways God has spoken to me through nature, giving examples in the eight previous posts in this series. I started the series because I wanted to explore some specific memories of God speaking to me through nature. What I’ve learned from writing these posts has been quite surprising. I’ve been surprised by

1. How clear it is that before I was a Christian, God’s voice through nature was quite diffuse and general. “There’s something more than this physical word,” Mount Rainier seemed to say to me when I was 15.

2. How God’s voice through nature became so much more focused after I became a Christian and was reading the Bible regularly. My first Easter Sunday as a Christian, the clouds moving up a mountainside spoke to me of God’s resurrection and God’s upward call to us in Christ.

3. How God’s voice to me through nature is often quite metaphorical. Those clouds floating upward functioned as metaphors for the resurrection. Mount Rainier’s disappearance into clouds is a metaphor for the feeling of God’s absence even though I know God is still there. The three birch trees in my back yard that looked like young girls dancing were a metaphor for our joy in God’s presence.

4. How nature helps me imagine Jesus as a man who spent a lot of time outdoors. I wrote about my practice for many years of imagining Jesus in a boat on Greenlake, and I handed him my sorrows and fears. This picture of “Outdoor Jesus,” who enjoyed nature and who spent time with his Father outdoors in the early morning, is something I’d never thought about before.

I invite you this week to ponder the speech of God through nature to you. What new things does that speech reveal to you about God?

(Next week: harmonizing God’s voice through nature and the Bible. Illustration by Dave Baab. If you’d like to receive an email when I post on this blog, sign up under “subscribe” in the right hand column.)

This is the ninth post in a series on the ways God speaks through nature. Previous posts: