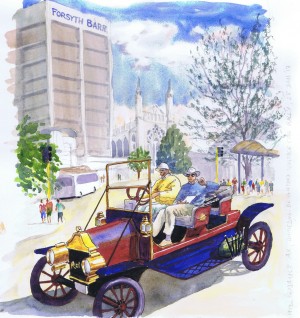 The fear of initiating is a significant obstacle in friendship. If I call and invite someone to get together with me, will I be rebuffed? If I ask someone over for dinner, will they hate the food I fix? Will my house be too messy? Will conversation lag?

Isn’t it better just to wait until someone takes initiative with me?

Damon, a nurse in his late forties, has been working on initiating in friendships for the past twenty years. He has come to view it as one of the tasks required for his spiritual growth.

I remember being an adolescent and a teenager. It seemed like there was always something to do. There were plenty of boys in my neighborhood, and we played baseball and basketball all the time. Then I went off to college, and the other guys in the dorm were always up for a movie or a game of tennis. It just seemed to happen. I didn’t have to take action myself in order to have friends.

Then I grew up and got a job. I was the only male nurse, so I was lonely at work. My roommates were busy working, and I didn’t know how to find people to do things with. In my family growing up, the mantra was ‘What will the neighbors say?’ There was a lot of shame and fear. My parents seldom invited people over to our house, because they were worried someone would take offense at the food they served or the way we lived. My dad had friends from work, but my mom was very isolated because of her fear.

When I met my wife, I was so surprised to find that she came from a family where both her parents had a lot of friends. They had people over for meals, they visited friends when they went on vacation, they sent bazillion Christmas cards every year. I watched my wife handle her friendships. She was always taking initiative in some way, sending a card, calling someone up, inviting people over. I realized I had never learned how to do that. So I started trying. I realized that if I wanted to show Christ’s love to the people I knew and if I wanted to have friends, I had to learn to take initiative.

It felt so awkward at first. Twenty years later, I’m still learning. But it comes more easily than it did before, and I have friends now. Good friends. Real friends. And I see that reaching out to people is a part of being a loving person, which has the side effect of nurturing friendships as well. And it brings great joy to me in the process.

About a decade ago, Damon reconnected with his cousins on his father’s side of the family. They live on the other side of the country. In the past ten years, he has seen them in person a few times at family gatherings and funerals, and he has emailed off and on with them, feeling increasingly close to them. Recently his cousin Betsy had a stroke. Damon found out about it through an email Betsy sent to friends and relatives. He emailed back, saying he was praying for her.

One morning, a few weeks after Betsy’s stroke, Damon woke up thinking about her. She stayed on his mind through breakfast and into the morning. He decided those thoughts might be a nudge from God that he should phone her.

She was at home alone and delighted to hear from him. In the first couple of weeks after the stroke, family members and friends from her church had been coming to help her every day, but now she was alone. Damon’s call was a lifeline for her that day, and when they hung up, she said to him, “You’re a sweetheart.”

The words warmed his heart, particularly in the light of his long journey to learn to initiate with friends. Listening to those nudges from God is playing an increasingly significant role for him as he continues to grow in intentionality in friendships.

Damon’s story illustrates the encouraging reality that taking initiative in friendship can be learned. It takes time and effort. Initiating can feel uncomfortable and awkward, but it does become easier with practice. In recent years Damon has experienced increased ease in reaching out to friends and potential friends in a number of ways.

(Next week: Different ways of initiating. If you’d like to receive an email when I post on this blog, sign up under “subscribe” in the right hand column. Illustration by Dave Baab.This post is excerpted from my book Friending: Real Relationships in a Virtual World.)

Previous posts in this series:
Initiative in friendships
What Mary might have missed
Obstacles in taking initiative

An article you might enjoy, that I wrote for the magazine Alive Now, discusses conversation skills, a relevant topic for friendships:
Growing in loving conversation