Nurturing friendships in a cellphone world: My conversation partners about friendship 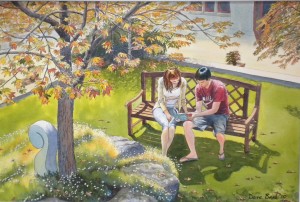 In preparation for writing my book on friendship, I interviewed dozens of people ranging in age from 12 to 85. They said fantastic and fascinating things about friendship. I used their voices throughout the book, and I also drew on the voices of some of my closest family members, with whom I’ve been discussing friendship all my life.

My mother, now in her mid-nineties, has been a powerful model of friendship for me. She has always had a small group of close friends and a whopping circle of other friends and acquaintances. She is always open to making a new friend at church, at her golf club, in her neighborhood or in the wider community. She invites people over for meals, writes cards and notes, makes phone calls, sends emails and shares photos online, and she continues to do these things in her 90s. My father died several years ago, and she now goes on trips with her friends. She is always very conscious of those friends she hasn’t seen for a while, and she makes contact when too much time has elapsed. Mom has said to me many times, “You have to work at friendships. If you don’t, they wither.” She lives out her commitment to her friends every day of her life.

My brother is another valuable conversation partner with me on the subject of friendships. Mark has a tight circle of close friends, and he had made many intentional choices to provide support to them over the years. He works hard to be faithful to his family, so he limits his time with friends, but he never neglects them. Every Friday after work he gathers with his buddies to drink beer and swap stories for a couple of hours. He might play golf or squash with one or two of them during the week as well. Once a year he spends a weekend in Reno with his circle of local friends, expanded to include his two closest friends from high school who live a couple hundred miles away. And once a year, this same group of his local and high school friends spends five days together skiing. My brother exemplifies a wonderful balance of work, family and friends, and he also models careful, intentional thinking about his friendships.

My two sons have also stimulated my thinking about friendships. My younger son did masters degrees in England and Denmark, then lived Denmark and Germany for a decade. He made friends with people from all over the world and nurtures his connection with them in a variety of ways: blog posts, Facebook, Twitter, texting, emailing, Skyping, and visiting. It has been fascinating to watch him use such a wide variety of means to stay connected. My older son has nurtured a deep friendship with his wife, and he also stays in close touch with his childhood best friend and a wider circle of friends. You'll read more about both sons next week because they have very different views of contemporary communication technologies, and their viewpoints summarize some of the major issues I want to cover.

In my interviews, when people talked about social networking, most of them referred to Facebook. Those interviews were conducted a few years ago. I wonder what most people would refer to now.

In addition to social networking websites, many other new forms of communication connect friends with each other. Many bloggers enjoy in-depth discussions with the people who respond to their blog posts. Photo-sharing websites, online support groups and websites for people with narrowly focused interests provide venues for meaningful connection. Skype, Facetime, and other forms of online video conferencing play a major role in many people’s lives. Email remains popular, and many people use instant messaging and cell phone texting. These and other communication options will undoubtedly continue to proliferate, and the kinds of intentionality and commitment that have always been necessary for friendship will have relevance for the new, and as yet unknown, forms of connection as well.

(Next week: Two views about communication technologies. Illustration by Dave Baab. If you’d like to receive an email when I post something new on this blog, sign up under “subscribe” in the right hand column of the whole webpage.)

This is the second series about friendship on this blog. The first series was called "Initiative in Friendships," and you can read the first post here. Just click "next post" at the bottom and you can work your way through the series of seven posts. Here are three of my favorite posts in the series:
What Mary might have missed
Different ways of initiating
A gift given to me by initiative