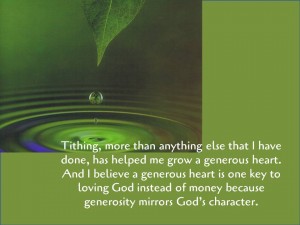 Money was my father’s joy in life. He loved earning it, and he especially loved investing it and managing it. My bedtime stories in elementary school involved tales of how compound interest works and why it is so wonderful. Dinner conversation in my teen years involved lessons about the Fed and how its actions impact inflation. When I took economics 101 in college, I was bored out of my mind. Doesn’t everybody know this stuff, I wondered. Don’t their fathers teach them?

As you can imagine, my father’s teaching about money impacted me profoundly. In my teen years, I was very, very careful with money, tracking every penny I earned, spent and saved. After I became a Christian at 19, I learned that financial generosity is a part of Christian living. I learned that Jesus said we cannot serve God and money. I felt that my world view was being subjected to an earthquake.

I can vividly remember the first time I put a ten dollar bill into an offering basket. I was 20 or 21. The offering was being taken at a student conference, and it would go for student missionary work overseas. As I put the money in the basket, I felt as if my heart was being torn out of my chest.

At 22 I got my first full time job. I felt led by God to tithe, to give away 10% of what earned before taxes. I had a very small salary, so 10% wasn’t a very big sum of money (a good thing), but it felt like I was breaking everything I learned from my father about money (a painful thing). Two years later, I got married. My husband and I made the same decision about tithing.

We have tended to give 5% of our income to our local church and the other 5% to friends who missionaries and to microloans through Opportunity International. For a period of time in the early 2000s, we had a much higher income than we had ever had before, so we gave away more than 10%.

I have learned that many New Testament scholars and theologians do not believe that the Bible instructs Christian to tithe. Perhaps not. But the regular and consistent giving away of a set percentage of my income has shaped me. I still enjoy managing money, just like my father taught me. But I see clearly that generosity with money (and with time and possessions as well) reflects the generous heart of God revealed in Jesus. I’m so grateful that the selfish and self-absorbed girl who once struggled to put $10 into an offering basket has been transformed into a woman who enjoys acts of generosity, at least some of the time.

Part of the reason why we can’t serve God and money is that focusing on money too much removes generosity from our hearts, and generosity is close to the heart of God. “For you know the generous act* of our Lord Jesus Christ, that though he was rich, yet for your sakes he became poor, so that by his poverty you might become rich” (2 Corinthians 8:9, NRSV). When we serve or worship money, we are not allowing ourselves to be transformed into the image of Christ the Generous One. Tithing, more than any other thing I have done, has shaped me into a person who has moments of reflecting Christ’s generosity.

In addition, as my friend Steve Simon told me one time, God tells us to give because it builds our trust in God as our provider and because it keeps us from being enslaved to the god of More. I believe tithing sets up a structure that shapes us into people who trust God to provide and who resist the power of the god of More. At any time, a structure can become an end in itself and a source of pride and arrogance, and I’m sure in some cases tithing gets warped that way. However, if we tithe with the goal of growing in reflecting God’s generosity, increasing in trusting God and resisting the powers that tell us more is better, over the long haul this spiritual practice can be a significant source of transformation into the image of Jesus Christ. That’s what it’s been in my life.