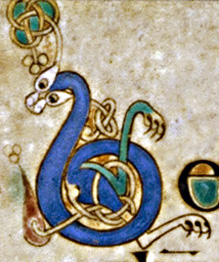 A few years ago a friend from Ireland gave me a book full of pictures from the Book of Kells. I was astonished at the beauty and complexity of the illustrations. It was my first introduction to Celtic Christianity.

The Book of Kells is a lavishly illustrated version of the four Gospels, produced in Ireland between the seventh and ninth centuries. Capital letters are colorful figures of people or animals, intertwined with Celtic knots, those crossed lines with no beginning or end that we see so often today in Celtic jewelry.

There are animals everywhere in the Book of Kells. Fish swim between lines of text; rabbits and mice scamper between the lines. The artists clearly had a deep fondness for God’s creatures. A lightness and exuberance characterize every page of the Book of Kells, along with a joy in nature and artistry. These are typical characteristics of Celtic Christianity.

Who were the Celts? The Celts were tribal people who can be traced as early as 500 B.C. in France and Germany. The Roman Empire pushed some of the tribes north and west to Great Britain. Within Britain, the Romans pushed them yet further north and west.

Christianity began to come to the British Isles in the second and third centuries after Christ. In the fifth century, St. Patrick was one of many people who brought the Christian faith to Ireland. Because the Christian faith flourished within the already existing Celtic culture, and because the Celtic lands were so far from Rome, Celtic Christianity has a unique flavor and emphasis.

What we call “Celtic Christianity” flourished from about the fifth to ninth centuries throughout the British Isles, but particularly concentrated in the west and north: Cornwall, Wales, Scotland and Ireland. There were also Celts in Brittany in France. Today these lands often host Celtic festivals, both Christian and pre-Christian. In this blog post and the posts over the next few weeks, we will look specifically at the unique flavor of Christianity as we believe it was practiced in Celtic lands from the middle to the end of the first millennium.

The Celts were described briefly in Greek literature in the centuries before and after Jesus, but very little is known about the pre-Christian Celts. We do know that in the Roman Empire the Celts were renowned for their ability to learn very long stories and poems from memory. Much of what we know about Celtic Christianity we have learned through the poems, prayers, blessings and ballads that have been passed down through the generations in Celtic lands. For centuries, probably ever since the time of Patrick, Celtic children learned about God from the words of their mothers and fathers as they sang softly while cooking, sewing, farming and caring for animals.

In the early twentieth century, travelling salesman Alexander Carmichael visited the highlands and islands of Scotland. He wrote down and published six volumes of Celtic “hymns and incantations” in the collection entitled Carmina Gadelica.

I can imagine myself as a woman living in Ireland or Scotland 1,200 or 1,500 years ago. As I set off on a short journey to visit my parents in a neighboring village, I sing to myself a blessing for my journey:

I can also picture myself as a mother or grandmother of young children in Celtic times. As I mend clothes by the firelight in the evening, I sing a soft song that the children can hear as they fall asleep close by. I sing it every night, and the children know it as well as I do. One of them sings along with me:

Celtic Christian had a vivid sense of the supernatural, and they cultivated places and times of year when the supernatural world seemed most close to our world. They Celts loved pilgrimages to places where God felt close. They were comfortable with experiencing mystery and awe in the face of a transcendent God. They loved the Trinity: three in one, one in three. These are some of the themes we’ll look at in blog posts in the coming weeks.

(This is the first post in a series on Cletic Christianity. If you’d like to receive an email whenever I post on this blog, sign up in the right hand column under “subscribe.” This post excerpted from A Renewed Spirituality: Finding Fresh Paths at Midlife by Lynne M. Baab. Copyright © Lynne M. Baab.)