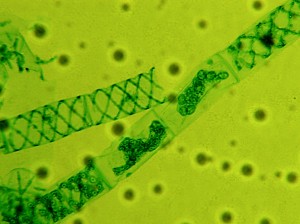 The view under the microscope was gorgeous. The slimy mass of green scum I had scooped out of a drainage ditch revealed itself to be long strands with bright green geometric patterns. The color was beautiful. The patterns were beautiful.

I lifted my head from the microscope and stood in that biology lab praising God for creating something so amazing, yet hidden from view most of the time. Who would have thought that algae could speak to me, calling me to praise the God who made it?

I was 20 years old that fall day in the biology lab. I had become a Christian the previous Christmas, and I had studied for a total of four weeks at L’Abri Fellowship in Switzerland – two weeks at Easter and two weeks in June – diving deep into the book of Romans. I had learned a great deal of Christian theology by listening to recordings of Francis Schaeffer talking, hour upon hour, about Romans. Romans, and Francis Shaeffer’s reflections on it, helped me learn to worship God with my mind. (I wrote about my time at L’Abri last week.)

I returned to Willamette University in Oregon, eager to get involved in the Christian fellowship group there. We met on Sunday nights. Some of the students played guitars, and I learned the praise songs they taught us. We often had speakers at our meetings, usually staff from InterVarsity Christian Fellowship. The praise music and the speakers called me into God’s presence and gave me a place and words for praising God.

But in that first semester back at Willamette after becoming a Christian, some of my most powerful moments of praising God were stimulated by what I saw in the microbiology lab. The green geometric forms of algae were probably my favorite, but I also loved bacteria. We grew various kinds of bacteria on Petri dishes, then spread them on slides, stained them with dyes, and looked at them under the microscope.

The bright colors caused by the dyes and the repeated shapes of the bacteria spoke to me of the intricacy of God’s creation. Bacteria, like algae, called me to praise the God of tiny things.

That semester I was working part time for an astronomy professor, typing up his handouts and exam questions and serving as a lab assistant. He took the students, and me, on some field trips on moonless nights to look at stars. The dark, cold nights with stars blazing overhead called me to praise the God of immensity, who created a huge and expansive universe.

In the long hall of the science building, the astronomy professor had created a scale model of the solar system. The sun and planets were tiny dots with many feet of hall between them. I loved walking down that hall, pondering the amount of space between the planets and then also between our solar system and other suns.

Not everyone has the privilege of looking at algae under a microscope or serving as a lab assistant in an astronomy class. But most of us are exposed in some way to the wonders of the created world as revealed through science. I encourage you to ponder something you’ve read about or seen on a science show or in some other science-related setting that calls you to praise God.

Two years ago on this blog: The last post in a series on Benedictine spirituality. That post was one woman’s story about a trip to a Benedictine monastery, a great place to start the series. At the bottom of the post are links to the other posts in the series. I highly recommend developing an understanding of Benedictine spirituality because of its three vows of stability, conversion of life and obedience – all of them so helpful in our time with so much emphasis on constant movement, self-focus and pride.