Celtic Christianity: sorrow for sin without self-absorption or self-punishment 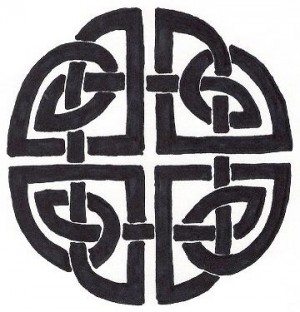 Celtic Christians had a strong sense of evil in the world, with a particularly keen sense of their own tendency toward evil. This influenced their patterns of prayer in a profound way, calling them to express sorrow and sadness in prayer as well as joy and thankfulness. They understood clearly that the death of Jesus was absolutely necessary to buy back the universe from Satan, who had taken the world under his power because of human sin.

Because of the Celt’s joy in nature, it would be easy to believe that they saw everything as good. Instead they had a healthy balance between the wonder of the created world and the presence of evil in that world. With world events in our day showing us evil in new ways and inciting fear for our personal and national future, it’s especially important that we achieve a balance like that of the Celts.

Esther de Waal writes about the sense of guilt that bedeviled her childhood, the sense of never being good enough, of failing again and again in trying to measure up. In the Celts there is none of that kind of self-focused guilt. Instead, she notes that in the Celtic poems and songs,

I have found sorrow, deep sorrow, many tears, an outpouring of grief, but it is never turned on itself, never the kind of sorrow that becomes inward, self-destructive guilt, feeding on itself. Tears, as I learn them from the Celtic Christian tradition, are never what so often my own tears become: tears or rage or of self pity, tears of frustration, tears because I have put my own self at the center of the picture and feel that I have not received the treatment that I deserve – the tears of a child, in fact, for whom “life isn’t fair.” . . .  But true tears are those of real, deep personal sorrow, of repentance, that lead to the determination to change.[1]

The Celtic Christian patterns of prayer (described here and in last week’s post as well) are very appropriate in our self-focused, consumeristic world today. We find ourselves longing for an authentic spiritual practice involving the whole self. Celtic Christian prayer isn’t a superficial practice involving only a part of life. The Celts brought themselves, their very beings, to God in gratitude, in praise and in sorrow.

A testimony about Celtic Christianity and prayer:

My travels to Ireland have changed me, most noticeably in my desire to infuse my own life with more quiet. Celtic spirituality embraces the necessity for silence and solitude in order to connect with God, to hear him, to renew one’s self. The lush Irish countryside invites this kind of tranquility, but I have found that intentional quiet moments can be equally fulfilling right in my own living room in the middle of fast-paced America.

The Celtic view of prayer is simple and comprehensive: pray all the time. The Apostle Paul’s command, “Be joyful always, pray continually; give thanks in all circumstances” (1 Thessalonians 5:16-18) is taken quite literally. There are volumes of books written on Celtic prayer that include prayers for every action that might occur in a normal day. From waking to eating to working to playing to sleeping, Celtic spirituality bathes each day in prayer. [2]

(Next week: the paradoxes of Celtic Christianity. This post is excerpted from A Renewed Spirituality: Finding Fresh Paths at Midlife by Lynne M. Baab. Copyright © Lynne M. Baab. If you’d like to receive an email whenever I post on this blog, sign up below under “subscribe.”)

My short book on holding grief and gratitude in two hands helps us cope in hard times. Two Hands: Grief and Gratitude in the Christian Life guides us into experiencing both the brokenness and abundance of God's world with authenticity and hope, drawing on the Psalms, Jesus, Paul, and personal experience. It is available for kindle and in paperback (80 pages).