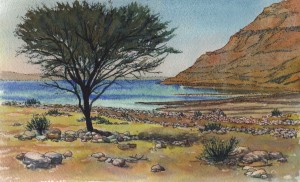 I wrote last week about initiative in friendships. One of my favorite friendship stories in the Bible reveals an easy-to-miss act of initiative. Luke 1 and 2 describes the miracle pregnancies of two cousins, Elizabeth and Mary, and the friendship that grows between them.

Elizabeth and her husband were getting on in years, and they had no child. In a series of dramatic events, God reveals to Elizabeth’s husband that they will have a child who will have a significant role in God’s plan. That son will be John the Baptist.

Mary is also pregnant with a miracle baby, Jesus. The angel Gabriel gives Mary the news that she will bear a son who will be called “the Son of the Most High” (Luke 1:32). After Mary asks how this can happen, given that she is a virgin, Gabriel explains that the Holy Spirit will make it possible. Then Gabriel says, “And now, your relative Elizabeth in her old age has also conceived a son; and this is the sixth month for her who was said to be barren. For nothing is impossible with God” (Luke 1:36-37).

Immediately after the conversation with the angel, Mary sets out on a visit to her cousin. She stays with Elizabeth three months, and we can only imagine the comfort these two women gave to each other. They undoubtedly talked over the miraculous events surrounding the conception of their babies. They probably shared their fears about the life their sons would lead and the impact of God’s call on each of them. According to Luke, Mary is in Elizabeth’s presence when she says the famous prayer often called the Magnificat, a prayer beloved by Christians for two thousand years (see Luke 1:46-55).

What we so easily miss is the fact that the angel did not tell Mary to visit Elizabeth. Gabriel simply announced that Elizabeth was pregnant after waiting so long. Mary chose to go visit. Her willingness to take initiative in this way nurtured the friendship between her and Elizabeth and benefitted both of them.

I can imagine another scenario that could very easily have happened if Mary hadn’t taken that initiative. In my alternative story, Mary stays home. The angel tells her that Elizabeth is pregnant, and Mary is happy to hear it. She tells her mother about it, and maybe local female cousins as well, and they spend a lot of time talking about how wonderful it is for Elizabeth to be pregnant. They tell each other stories of women they knew who struggled with infertility. They talk about women who became pregnant after giving up hope. Perhaps they refer to Abraham and Sarah from the Bible, or maybe they remember Hannah, another biblical character who became pregnant after waiting a long time. Pregnancy after infertility is a wonderful gift, and, just like today, probably everyone in Mary’s village had a story to tell about it.

But Elizabeth’s pregnancy had additional significance beyond the gift of a baby after a long period of infertility. Elizabeth’s son would grow up to be “great in the sight of the Lord” and would speak and minister “with the spirit and power of Elijah” (Luke 1:15, 17). If Mary hadn’t taken the initiative to visit Elizabeth, she would have missed talking with the one woman who had some inkling of the amazing thing that had happened to her and the high calling of her son.

After Jesus is born, Joseph and Mary present him in the temple. A faithful man named Simeon recognizes that Jesus is the Messiah. He says a beautiful prayer in response to seeing Jesus, and then turns to Mary and tells her what he sees about Jesus’ ministry. His final words to Mary are sobering: “A sword will pierce your own soul” (Luke 2:35).

Mary’s conversations with Elizabeth may very well have given her the foundation for the kind of strength and resilience she would need in order to live with that sword piercing her heart. Because of her visit with Elizabeth, she entered into her role as mother of the Son of God, knowing she was not alone in bearing a miracle baby who would be called to do extraordinary things.

We have no record of Elizabeth and Mary meeting again. When horrible things happened to John the Bapist and then later to Jesus, the memory of those three months with Elizabeth must have given Mary comfort. Mary would have rejoiced in her friendship with one other woman called by God to bear a child who would change history and who would bring tears and great sadness to his mother.