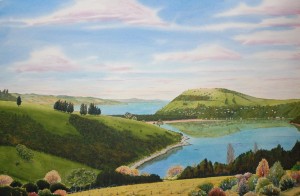 I regret that a little more than a decade ago I neglected to respond to two – or maybe three – consecutive letters from a friend. We had been in-person friends as young adults, and she moved away. Our friendship became a letter-based friendship, and we had a pattern of writing long letters to each other. We normally waited a month or two to respond, and we had a good rhythm for two decades. In 2010, I had a mysterious health condition that made me unbelievably tired for many months. I neglected so many things, including answering this friend’s letters. (I describe my miraculous healing here.)

The next year I explained to her I had been sick in 2010 and asked her if we could re-start the letters, and for some unknown reason I neglected to answer another letter. That was enough. She asked that I stop contacting her. Losing a friend through my own fault was devastating to me. I was sad. I was angry she hadn’t emailed me in 2010 to check on why I wasn’t answering her letters. I was SO angry at myself for neglecting to answer the letter from her in 2012.

I have always viewed myself as good at friendships, so this was devastating to my sense of my own competence at relationships. “What kind of a person would screw up a friendship like this?” I was incredulous that she wouldn’t give me another chance. “Why would someone destroy a perfectly good friendship like this?” I spent a lot of time regretting that I hadn’t asked her if we could Skype with one another or move to another form of staying in touch. I thought and thought about what I wished I had done differently.

In 2016 I began seeing a therapist named John. My purpose was to work through some family issues, and he taught me a simple idea that was incredibly helpful for me. He suggested separating thoughts from feelings. Feelings, he said, are a normal part of human life. I didn’t talk about the loss of that friendship with him, but I know he would have said that my feelings of sadness and anger were normal and even healthy responses to a loss. We have a strong model in the Psalms, Jeremiah, and elsewhere in the Bible of God’s invitation to bring our emotions to God, who welcomes hearing about them and who transforms them.

John said that thoughts are different. In 2015, my thoughts that had driven me to therapy were catastrophic about the future: “What if this happens?” With respect to the loss of my friendship, still simmering in 2015, my thoughts were self-condemning: “What’s wrong with me that I forgot to reply to that letter in 2012?” I also had critical thoughts: “What’s wrong with my former friend that she wouldn’t give me another chance?” Such thoughts, John said, are demonic.

John suggested that I explore the RAIN acronym to learn how to sit with my feelings. The four steps are: Recognize the emotion (which sometimes takes longer than I thought), Acknowledge the emotion by sitting and breathing with it for a while, Interrogate the emotion by asking what it wants, and then Non-identify with the emotion. This last step involves affirming that I am much more than my sadness or anger. Alongside sadness and anger, I may be feeling many other things, and whatever emotions I’m feeling, I am not identified with any of them.

John suggested that I notice the thoughts and let them go, like leaves floating away on a river. We sit with emotions, but we let catastrophic or self-condemning thoughts go because they are simply not helpful. As Christians we know that they are not what God desires.

I wrote six blog posts about what I learned about separating thoughts from feelings, and I’ll post links below. These past three weeks of writing about how we learn from regrets has brought this practice to mind. Regrets often get us stuck in demonic thoughts that spin through our mind, condemning ourselves and others. We can identify how we feel about our regrets and sit with those feelings using the RAIN process. We can bring those emotions to God. We can ask for the Holy Spirit’s guidance for how to learn from our sadness and how to let our sadness about our regrets empower us.

We can release the demonic thoughts about how awful we are that we did something stupid or hurtful. When we sin, God forgives us. We are not awful. We do not have to dwell on our shortcomings. That’s a lie from the pit of darkness, and that lie prevents us from learning from our regrets. We can ponder our regrets, feel the feelings, offer all of it to God, and ask that the Holy Spirit teach us and empower us to grow further into the image of Jesus.

(Next week: the second step in coping with regrets — share your experience with others. Illustration by Dave Baab: Purakanui Inlet, near Dunedin, New Zealand. I love getting new subscribers. Sign up below to receive an email when I post on this blog.)

I am thrilled to announce that my latest book, Two Hands: Grief and Gratitude in the Christian Life, is now available as an audiobook – Audible ($6.08) and Soundwise ($5.99) thus far. More formats coming.

Posts in my series on separating thoughts from feelings: