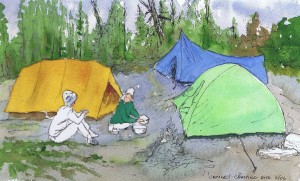 The generational patterns in the interviews were fascinating. Just about everyone with whom I spoke was concerned about someone else’s use of technology in relationships, and those concerns were expressed in generational terms.

The people my age, in their fifties and sixties, told me they had learned how to nurture strong and healthy face-to-face friendships during all those years before computers. They expressed a lot of concern about people in their twenties and thirties, wondering if they’ll be able to sustain marriage and parenting relationships because they’re so used to communicating using technology. The glib, brief and trivial nature of so much online communication might contribute to superficial relationships. Can people in their twenties and thirties have long, intimate conversations? Can they share their deepest feelings?

My two sons, in their thirties, as well as others their age and in their twenties who I interviewed, are confident of their own ability to nurture intimate friendships. Several of them cited their childhood without cell phones or the internet, saying they learned how to have close friends before the age of rampant electronic communication. These young adults, however, expressed concern about teenagers. With the proliferation of such brief messages in text messages and online posts, will they be able to engage in the kind of deep conversations that nurture true friendships?

The dozen or so teenagers I interviewed, ranging in age from 15 to 19, were also quite confident of their own ability to nurture friendships. They said they see very clearly that a person can become so focused on online communication and texting that they lose the ability to communicate in person. All of my teenaged interviewees were confident they knew how to handle that challenge. Many of them talked about the priority they place on face-to-face conversations to nurture friendships, in tandem with staying in frequent contact electronically. They said the frequent, brief updates they send and receive through texting and online social networking make it possible to begin face-to-face conversations from a point of connection. They already know the details of their friends’ lives so they can dive into deeper topics when they speak with each other.

Several of the teenagers, however, said they were worried about 12 year olds getting cell phones and joining social networking websites. These older teens worried that younger teens don’t have the wisdom to know how to deal with the impersonal nature of electronic communication, which they said is evidenced by the amount of cell phone and online bullying that goes on among younger teens.

Based on these interviews, and based on the many articles I’ve read in recent years about personal relationships in a technological age, just about everyone focuses their concern on other people’s use of technology in nurturing friendships. “I know how to cope with it all,” they seem to be saying. “But I don’t think others do.”

The comments I heard in interviews resemble the “third person effect,” documented by many scholars, where individuals believe that media have more negative influence on others than on themselves. People believe they can handle violence or pornography, but that others will not be able to cope as well.  (For example, see W. P. Davison, “The Third Person Effect in Communication,” Public Opinion Quarterly 47/1, 1983, 1-15.)