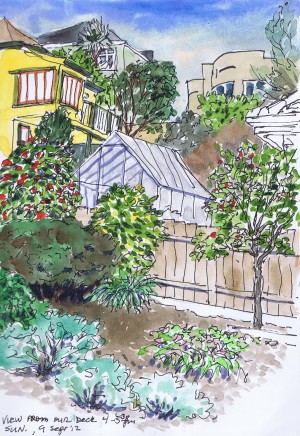 One Sunday morning I put a load of laundry in, and it was spinning and thumping as we left for church. The noise was loud enough that I realized we needed to get it fixed as soon as possible. On the way to church I had a bit of a revelation. A couple of weeks earlier I had washed a pair of shoes, and when the wash cycle was finished, one of the shoes was missing a piece of shoelace. I wondered if perhaps that five-inch length of shoelace was somewhere in the machine.

At church, the worship leader shared a little story about how God had worked in his life that week. I thought the story was pretty stupid. I’m generally not a hyper-critical person, but sometimes critical thoughts just jump into my head, and in that instance I was flooded with negativity. How could he think that silly incident showed God’s action in his life?

The worship leader then asked us to share with the person sitting next to us a story about something that had happened to us that week showing God’s hand in our life. Dave, my husband, was on my right, and he turned to the person on his other side. So I turned to the man on my left, who I didn’t know. We told each other our names and we told each other a brief story from the week.

When we finished our stories, other people were still talking, so I asked him what he did for a living.

“I repair appliances,” he said.

“Do you work on washing machines?” I replied, and he said he did. So I asked what company he worked for, fully intending to call the next day to ask for a repair person.

Then I told him I thought perhaps a piece of shoelace had probably gotten into some critical place in our washing machine. Could that cause thumping, I asked. He said yes and that after the service he’d be happy to tell me how to get it out.

And he did. He asked the make of our washing machine, he called up pictures on his phone, and he showed me a little door to open at the bottom of the machine. I would need to drain out water, and he told me the steps to do that, and then I would look inside at a little fan.

That afternoon I drained the machine carefully and found the piece of shoelace wrapped around the little fan. With scissors and tweezers, I got it out, and the machine worked just fine afterwards.

This lovely fellow told me how much it would have cost for a repair person from his company to come to our house, so I knew how much money he saved me. A good sum, but in the light of our upcoming move and all the expenses of moving, it wasn’t really that much money. But it still mattered a great deal. It was a sign to me of two things:

1.  God is involved in the everyday aspects of my life.

2.  Despite my negativity, the worship leader was following God’s guidance in telling his story and asking us to share stories. God wanted to give me a gift, and having a conversation with the guy sitting next to me enabled that gift to happen. Okay, so the story the worship leader told wasn’t a story that resonated with me as a way to illustrate God’s action in our lives. Maybe it touched someone else. Whether it did or didn’t, God gave me a gift initiated by something I thought was stupid.

God is God. I am not. God works in such amazing, unexpected and sometimes seemingly ridiculous ways. I need to curb my criticism and keep my eyes open. In The Message version of Isaiah 55:8, God says, “I don’t think the way you think. The way you work isn’t the way I work.”

(Next week, another story I ponder, about my Great Aunt Lynn. Illustration by Dave Baab, the view from the back deck of our former house with the noisy washing machine. If you’d like to receive an email when I post on this blog, sign up under “subscribe” in the right hand column.)

On this blog one year ago: The last post in a series on worshipping God the Creator. The post has links at the end to the previous posts in the series.