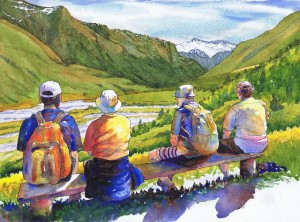 While we were away, two of my friends had learned about something called the Myers-Briggs Type Indicator. The three of us and our six kids went on a ferry ride together in the nine-seat Suburban one of them owned. On the way to the ferry, they told me about the MBTI in general and they said they knew very clearly what three of my preferences were.

The MBTI presents four sets of preferences describing ways our brains function. (If you don’t know what MBTI type is, you can read a good introduction here.) My friends told me they were sure that I preferred intuition, thinking and judging. They explained each of these preferences and everything they said made a kind of rudimentary sense to me. They talked about the origin of these ideas in the writing of Carl Jung, and they told me about the mother-daughter pair, Isabel Briggs Myers and Katherine Briggs, who adapted Jung’s ideas into a working psychological theory.

They said they couldn’t tell if I preferred extraversion or introversion. They said they saw me as outgoing and talkative, like most extraverts. But there was something about the way I talked about concepts and ideas that made them wonder if I might be an introvert.

We were waiting in a long line of cars at the ferry when they described introversion and extroversion to me. I remember the sunny day, the kids chatting and laughing, and the line of cars stretching ahead of us. The moment is etched on my memory because what they were talking about was and is so significant to me.

My two friends tag teamed as they explained these concepts. Extraverts, they said, are energized by the outer world, including people, things and activities. Introverts are energized by the inner world of thoughts and ideas. Both extraverts and introverts enjoy being with people. However, extraverts will usually be happy in large as well as small groups, while introverts will usually enjoy one or two people the most.

The central concept that lies behind these preferences, they said, is what you get your energy from and what you like to direct your energy toward, either the outer world or the inner world.

As they talked, I knew without any doubt that I am energized by ideas, concepts and deep conversations with a small number of people. I enjoy focusing my energy on the inner world. I find large groups of people tiring. I find the outer world – things, activities – tiring in large doses.

This was a giant AHA moment. My mother, whose values and priorities shaped my childhood, is a strong extravert. I always felt that something was missing in me because I got so tired being in large groups of people, the very settings my mother thrived in. I often preferred reading a book to going shopping for clothes. I had so often felt weird and flawed because my mother and I are so different.

At that time I had many other close relationships with extraverts, including my very loving husband. The work of Jung, Myers and Briggs gave me language to describe the difference in the source and direction of energy between me and those lovely extraverts, and that language conveyed great freedom. Thank you, God, for times when having the right language to talk about something brings clarity, freedom and acceptance.

I still get frustrated from time to time because I’m an introvert. I get tired in so many group settings. There are days I feel that I would give anything to have been created as an extravert. But then I stop and remember that the greatest joy of my work life, writing, comes out of time for reflection and also from deep conversations with individuals or small groups of people. Over and over I need to turn to God in gratitude for making me who I am, and for making others different than I am.

My first book focused on how congregations can use the MBTI: Personality Type in Congregations. Even though it was published two decades ago, it still sells reasonably well, to my great delight. I’ve also got two articles about MBTI type on my website:

(Next week: One thing I learned from living in Sweden for a year. Illustration by Dave Baab. If you’d like to receive an email when I post on this blog, sign up under “subscribe” in the right hand column.)