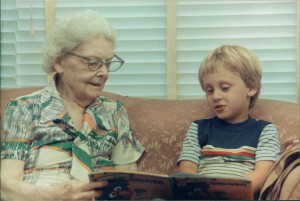 I was indirectly named for my Aunt Lynn. I say “indirectly” for two reasons. She was actually my great aunt, and her name was Evelyn. My dad, her nephew, called her “Aunt Lynn,” so my brother and I were taught to address her that way.

My dad’s middle name was Lynn, after his aunt, so I was actually named after my dad. My mom added the “e” at the end of my name, because she read in a baby book that the “e” was necessary for a girl. Many times in my childhood I wished she hadn’t bothered with the “e” because people misspelled my name so often.

Aunt Lynn had an exotic life. Born in the mid 1890s, she didn’t marry until she was 40. She worked until she married, and a 20-year working life for women in her generation was quite rare.  Her husband was 20 some years older than she. They lived in Chicago, and he worked as a liaison between movie studios and local theatres. She met movie stars and studio moguls, dressed in a mink coat and looking quite elegant in the photos I’ve seen.

They had a son soon after they married, and Aunt Lynn doted on him. In my childhood, we passed through Chicago twice, and I enjoyed meeting this great aunt who my grandmother talked about a lot. My cousin seemed a bit odd.

When I was 23, I attended a conference in Wisconsin and I decided to take a few days in Chicago to get to know Aunt Lynn as an adult. At that point she was about 80, and I loved her stories about the movie world of the 1930s and 1940s.

She also talked about how lonely she was. She had not been a church attender as an adult, unlike her sister, my grandmother, so she didn’t have any community there. Her husband had been so much older than she, so she had been a widow for several decades. In addition, most of their friends during their married life were his age rather than her age, so all her friends were also gone.

Her son came by to see her once or twice a week, but as far as I could tell, he was almost her only human contact. She talked on the phone occasionally with her sister in Baltimore, but they were both frail enough that they didn’t travel to see each other any longer.

I made it back to Chicago a couple more times before Aunt Lynn died at 94, and in every visit she talked about her loneliness. I’ve thought about Aunt Lynn’s words all my life. Because of those conversations with her, I have made a big effort to build relationships with people of different generations than I am: older people because they might be lonely, and younger people because perhaps they’ll still be my friends when I reach old age.

Christians have two advantages regarding loneliness. We have the church community, providing us with many opportunities for connection with people across generations. We also have the companionship of Jesus through the Holy Spirit, a gift I appreciate more as I age. Jesus says to his disciples, “I will not leave you orphans; I am coming to you” (John 14:18). He is referring to his presence through the Holy Spirit.

When I have conversations with people who are younger than I am, and when I try to build relationships with younger folks, I don’t view myself as a mentor or a wise older person. I figure by the time I’m 90, and they’re maybe 50 or 60 or 70, they’ll be plenty wise, and I’ll hopefully have the privilege of still knowing them, and I’ll be able to draw on their wisdom.

I want to ignore the age difference and see myself simply as a companion on the journey of life. And, in fact, the people I talk with who are several decades younger than I am are already plenty wise. They enrich my life so much now.

To those of you in my circle of friends, colleagues and acquaintances who are younger than I am, thank you for being in my life. I am so grateful that my Aunt Lynn’s loneliness motivated me to look to people of all ages as companions on the journey of life.

(Next week: A tale of two grandmothers. Photo: Aunt Lynn reading to our son Jonathan in a 1984 visit to Chicago. If you’d like to receive an email when I post on this blog, sign up under “subscribe” in the right hand column.)

Happy News! Last week I received an award from the Australian Religious Press Association for the best social justice article. It’s an article about listening to people who are different than we are, and you can read it here.