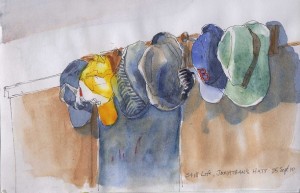 In the decades since I asked that question, Christian theologians have engaged in a burst of writing and thinking about the Trinity, emphasizing the intimate relationship between the persons of the Trinity. [1] What does it mean to be made in God’s image? Today, many theologians would answer by saying that humans are created for relationships that mirror the relationship between God the Father, God the Son and God the Holy Spirit. Being made in God’s image means that we are created to love and give and care. We are invited into intimacy with the triune God, the God of relationship, and we are invited into intimacy with each other.

I was in my mid-thirties when I first heard that revised answer to my burning question, and it was a giant aha moment for me. I had liked the previous answer. I had liked believing that what sets humans apart from animals is that we are rational. It made me feel a bit smug. I can do “rational” fairly easily most of the time.

Pondering the image of God in humans as a call to relationship didn’t make me feel smug. It made me feel challenged. It called me to be my best self, to let go of selfishness and grudges and pride. It said to me that using my rationality and intelligence as ends in themselves might be a good thing, but using my rationality and intelligence and other gifts to serve people and nurture connections with them is infinitely more important.

For the next few weeks I’ll be writing about friendship with God as a foundation for human friendships today. For this week I encourage you to ponder some questions:

If you’ve never thought of this idea, spend some time pondering what you know from the New Testament about the way Jesus relates to his Father. Is there anything from that relationship you have already brought into your human relationships? Something you’d like to grow into?

The relationship between the Holy Spirit and the other two persons of the Trinity is harder to discern, but there are hints throughout the New Testament. Ponder whether there’s anything in that relationship you have already learned from or would like to learn from?

I’ll end this post with a couple of quotations that don’t mention God or friendship with God, but which I think capture the theme of the Bible’s message about our call to mirror God’s character.

“A friend is someone who knows all about you and likes you anyway, one who listens without telling and confides without withholding, who depends on you when the going is tough and laughs with you most of the time.”
—Deborah, a retired teacher in her seventies

“The supreme happiness of life is the conviction that we are loved for ourselves.”
—Victor Hugo (1802–1885)

(Next week: Jesus as friend. Illustration by Dave Baab. If you’d like to receive an email when I post on this blog, sign up under “subscribe” in the right hand column of the whole website, or if you can’t access that on your phone, email me at LMBaab[at]aol.com, and I’ll add you to the email list. This post is adapted from my book Friending: Real Relationships in a Virtual World. I have copies for sale at a low price, so contact me if you're interested.)

Some past posts about friendship:

[1] Among many books I could cite, I’ll mention two books by Stanley J. Grenz because the titles capture the wording used so often by theologians in recent decades: Created for Community: Connecting Christian Belief with Christian Living (Wheaton, IL: Victor Books, 1996), and The Social God and the Relational Self: A Trinitarian Theology of the Imago Dei (Louisville, KY: Westminster/John Knox, 2001).