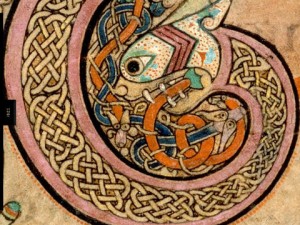 Ross, 62, is a retired businessman who has been studying Celtic Christianity for many years. His involvement in creating an illuminated biblical passage in the Celtic style has helped him enter into the values and integrated worldview of the Celts:

Celtic Christianity allowed God to reach me on all sorts of levels. The Book of Kells [1] and the other Celtic illuminated manuscripts made me see another side of God’s truth, the way truth is connected with beauty.

I am awed by the Celtic monks’ willingness to put their lives into their art. I am awed by the beauty, elegance and style of their art. These dear brothers and sisters prepared themselves for the holy task of working with Scripture. Before they picked up a brush each day, they spent time in confession and received forgiveness. They viewed their work very much as a part of their worship.

I myself am working on a piece of Celtic art. I’ve got a nice big piece of vellum [2], and I’ve sketched out a Scripture verse. In this past paced world, where you can generate a piece of computer art in a few minutes, it’s amazing to think of the time and effort lavished on each page of the Book of Kells. Working on my own Celtic art connects me with the patience and long vision of the Celtic months. It may take me ten years to have something of quality that can be passed on.

There’s a lot to it. The art, the chemistry of missing the colors, the challenge of working with gold leaf. The Celts were so integrated with God’s creation, and I experience a little of that integration as I work on my own piece of art.

[1]The Book of Kells contains the four Gospels in Latin based on the Vulgate text which St Jerome completed in 384AD, intermixed with readings from the earlier Old Latin translation. The book is written on vellum (prepared calfskin) in a bold and expert version of the script known as "insular majuscule". The manuscript’s celebrity derives largely from the impact of its lavish decoration, the extent and artistry of which is incomparable. Abstract decoration and images of plant, animal and human ornament punctuate the text with the aim of glorifying Jesus’ life and message, and keeping his attributes and symbols constantly in the eye of the reader. The date and place of origin of the Book of Kells have attracted a great deal of scholarly controversy. The majority academic opinion now tends to attribute it to the scriptorium of Iona (Argyllshire), but conflicting claims have located it in Northumbria or in Pictland in eastern Scotland. It must have been close to the year 800 that the Book of Kells was written. (More about the manuscript here, and images of it here.)

[2] Vellum often refers to a parchment made from calf skin, as opposed to that from other animals. It is prepared for writing or printing on, to produce single pages, scrolls, codices or books.