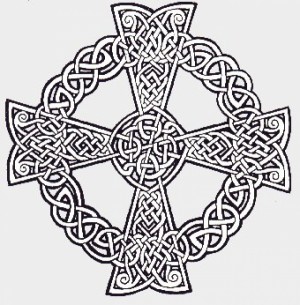 Celtic culture was monastic and communal. Villages centered around small monasteries, and prayer and devotion of the monks contagiously spread into village life. Ordinary village people often prayed the daily offices – the liturgical daily prayers at set times – with the monks or at home with their families. The pattern of each day was punctuated with calls to prayer at specific times. This created a rhythm in each day, as well as a rhythm over the course of the year as the prayers changed to reflect the church calendar.

The Celts looked for people to act as mentors for them, and they called those mentors “soul friends.” Having a soul friend was an integral part of living in community. In our day, more people are finding great help from working with a spiritual director, a person to meet with on a regular schedule, perhaps monthly, who helps us discern the hand of God in our lives. A partner on the journey feels like a helpful support.

Women were valued as leaders in Celtic Christian society, and the female leaders of monasteries for women were regarded with as much respect as the male leaders of monasteries. Brigid of Kildaire and Hilda of Whitby are just to examples of women who founded monasteries and were viewed as leaders in the wider Christian community. [1] The leadership of women, along with the partnership between men and women, was one of the aspects of Christian community that was lost when the church in Celtic lands became more connected to the Roman church.

Celtic monks had a compulsion to share the joy of their consciousness of the Holy Three and of God’s creation. The gospel dictum of mission allowed such sharing, and they seemed possessed by that call. . . . Within their passionate style of evangelization was a sensitivity to the human dignity of those they encountered. . . They respected the responses of those who resisted. Ultimately missionary efforts were viewed as the Holy Spirit’s domain, so despite the intensity of their work, the results were accepted with humility and abandonment. [3]

Another aspect of Celtic Christian community, which may seem unusual to us, is their embrace of silence. Silence was an important discipline in the Celtic monastic tradition, and that tradition influenced everyday life outside the monasteries. We may find it easy to believe that community always involves a lot of communication; the Celts embraced silence as a form of communication with God that forms one of the foundations for community life.

This blending of silence and community can sound attractive at many stages and phases of life. Time to think and pray, and time to reflect, become important at certain times. The security of the embrace of the community, to uphold us and encourage us as we reflect, think and pray, feels like a wonderful balance.

The Celts’ practice of their faith was so integrated and wholistic. Hospitality, mission, art, connection to the earth, women and men serving together, silence and community were all woven together as a seamless garment. Their unified faith that spread into every aspect of life can be a tremendous model for us as we seek to live in relationship with God in our fragmented culture.