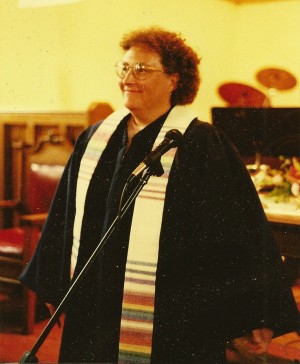 Oddly enough, out of the five aunts I had, two of them worked full time. One was a secretary, like my mother had been before she got married, and the other one was a teacher. So as a child I dimly understood that some women – a very small number, mind you – worked outside the home in roles like secretaries or teachers. I literally had no picture in my mind, no ability to imagine, a woman working in any role other than a support role or a teaching position.

I became a committed Christian at 19, and soon after that a new InterVarsity Christian Fellowship staff-worker came to my campus, Becky Manley (now Becky Pippert.) Becky took me under her wing, gave me all sorts of encouragement, and helped me grow in faith in so many ways.

Becky did a lot of speaking at our college fellowship group and at conferences. She was part of a staff team headed by a man named Fred Wagner. It was always clear to me that Fred was a strong and competent leader of the staff team, and I enjoyed getting to know him at conferences.

As I got closer to graduation, Becky and Fred invited me to join them on staff with InterVarsity Christian Fellowship. I ended up serving as a staff worker for four years. In those years I often spoke to groups. I led retreats. I exercised a variety of teaching and leading roles, always under the umbrella of Fred’s leadership.

I got married in my years with IVCF. Dave and I left Seattle and served in Iran and Israel as self-supporting missionaries. I did a variety of leadership and support roles in our churches in the Middle East while pregnant and while our first son was young. Then we returned to Seattle, got back involved in our big Presbyterian Church. I taught adult Christian education classes there.

In this overview of my life, I have now arrived at September, 1982, a life-changing moment. Our older son was almost 3 and our younger son was six months old. At this point in my life, I had never met a woman doctor, dentist, lawyer or ordained minister. I had led many small groups and spoken at many conferences, always under the oversight of a man.

I was aware that 1 Timothy 2:11 says that women should not teach or have authority over men, and I took comfort in the fact that all of my teaching and leadership has been directed by or encouraged by a man. So, with respect that that verse, I felt “safe.” But I definitely had questions.

Those questions motivated me to attend a conference at the Seattle Center sponsored by Christians for Biblical Equality. I arranged babysitting for my older son, and I took my baby with me each day. We sat in seminar after seminar. Sometime I nursed him while I listened intently. I collected handouts and articles.

The speakers talked about various possible interpretations of 1 Timothy 2, along with 1 Corinthians 11 and 14. They discussed the possible meanings of headship in Ephesians 5. They talked about the centrality of Galatians 3:28: “In Christ there is no longer . . . male or female.”

Fifteen years after that conference, I was ordained as a Presbyterian minister, breaking every pattern I learned as a child. I could not have moved toward ordination, or thrived as an ordained minister serving a congregation, without the knowledge I gained at the Christians for Biblical Equality conference.

Resources can change our lives: conferences, books, seminars, classes, sermons, even conversations. Pray for yourself and for those you love, that God would bring life-changing resources into your life and their lives. Pray that God would use you in ways that change other people’s lives.

(Next week: my husband and his sister. Photo of me on my ordination day, 20 years and 2 months ago. If you’d like to receive an email when I post on this blog, sign up under “subscribe” in the right hand column.)

You may be interested in an article of mine that recently received an award from the Australian Christian Press Association: To be a Neighbour Must Include Listening.