Friendship skills of asking, giving, and thanking: A biblical example and some questions for reflection 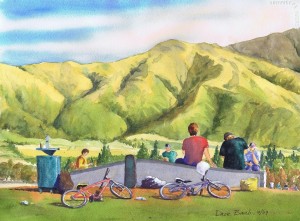 The story of Jeremiah and Baruch illustrates the relationship between asking and intimacy. Jeremiah, that passionate and beleaguered prophet in the Bible, got lots of help from a man named Baruch. Jeremiah 32 describes an incident where God told Jeremiah to buy a field as an act of hope for the future of Israel. Jeremiah asked Baruch to take the deed for the field and bury it in a glass jar so it would be safe for the future, and Baruch obeyed Jeremiah’s request.

Jeremiah 36 records another vivid drama. God instructed Jeremiah to write down the words God has given him, so Jeremiah again solicited help from Baruch. Jeremiah dictated God’s words to Baruch, and Baruch wrote them on a scroll. Jeremiah had been banned from the temple, so Jeremiah asked Baruch to take the scroll to the temple and read it out.

Ultimately the news about this scroll came to the king, who chopped the scroll into pieces and burned it in his coal fire, a dramatic portrayal of someone who passionately wanted to avoid hearing and obeying God. The king then set out to arrest Baruch and Jeremiah.

“But the Lord hid them” (Jer 36:26), so they were safe. Then the Lord instructed Jeremiah to write down all the words of prophesy again, so once again Baruch recorded Jeremiah’s words on a scroll.

Baruch is often called Jeremiah’s secretary, and indeed he filled that role. But he did more. He entered into Jeremiah’s call from God and helped him in more ways that simply writing down his words. He travelled with Jeremiah (Jer 43:43:1-4) and shared Jeremiah’s emotions (Jer 45:1-5).

Jeremiah is one of my favorite books of the Bible, and I like to ponder the fact that we probably owe its existence to Baruch’s willingness to write it down. Twice. Baruch’s loyalty illustrates the kind of friendship that can exist between people who are willing to serve God and do as they are asked, even if the roles they have been given are very different.

Jeremiah asked for Baruch’s help numerous times. Their friendship also illustrates the kind of partnership that develops when someone is willing to ask for help and someone else is willing to give it.

This is the last post in this series on the role of asking, giving and thanking in friendship. Here are some questions for reflection:

2. Ponder the obstacles you experience in asking for help from friends. Are they rooted in models of relationships from your family of origin or other childhood influences? Are they rooted in pride in self-sufficiency or shame in having needs? In what ways would you like to respond to these obstacles or pray about them?

4. Do you find it easy or hard to thank people? Have you experienced someone else’s thanks as a step closer in intimacy with them? Why or why not?

5. This week, ask two or three of your friends, colleagues or acquaintances how they would define “friend” or “friendship.” Watch particularly for any components of their definition that relate to asking, giving and thanking.

6. Spend some time praying about your patterns of asking, giving, receiving and thanking. Ask God for insight to understand why you do what you do, and ask God for help to grow in these areas.

This post is excerpted from my book, Friending: Real Relationships in a Virtual World. To learn about what the book covers, look here. I have several boxes of the book and I am hoping to sell them at low cost to people to use in groups. Every chapter ends with discussion questions, and numerous groups have used the book and told me it generated great discussion.