Quotations I love: God’s image in us when we speak 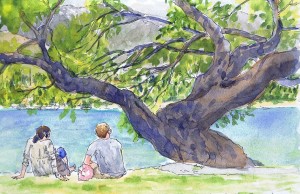 “Before God spoke the cosmos, God enjoyed constant colloquy – the Father engaging the Son, the Diving Logos (John 1 doesn’t call Christ ‘the Word’ for nothing) in conversation with the Father, all in the communicative power of the Spirit. . . . The meaning of ‘Let us making humanity in our image’ (Gen 1:26) is human speaking, even with its limitations, which is divinely permitted and authorized, imitating a defining characteristic of our Creator.”
—William Willimon, Preachers Dare: Speaking for God [1]

This quotation made me smile. After all, when I felt called by God in 2004 to leave a pastoral position and prepare to go into teaching, I did a Ph.D. in communication. I chose that field because I have always been passionate about good communication, and I wanted to learn more about how people have studied communication, analyzed it, and harnessed it for ministry. Hmm, did my passion for communication come from the image of God in me?

The second reason this quotation made me smile is that I always love hearing a new idea or seeing something familiar through a new lens, particularly a lens that takes me off guard and makes me think. When I was a young adult, I was taught that the image of God in humans relates to our intelligence and ability to be rational. I liked that view of God’s image quite a bit because I viewed myself as smart and logical. (Of course, that perspective of myself was pretty much shattered when life later threw some powerful curve balls at me which showed the extreme limits of my intelligence and rationality.)

In the late twentieth century, as the idea of the social Trinity became more common, I heard and read more people saying that God’s image in us comes in the form of being relational. I didn’t like this idea as well because I think relationships are infinitely challenging (as well as being great gifts).

Now, here we are, back at an idea I can relate to. Willimon is saying that human ability to communicate, specifically to speak, shows forth God’s image in us. Of course, we can connect this idea to the social Trinity. How could humans have relationships, as the persons of the Trinity are in relationship, without speaking – in the broadest sense of what it means to speak? (If you’re curious what “social Trinity” means, I discuss it in this article, in the section entitled “The relational Trinity and human relationships.”)

In this post, I don’t want to attempt to make an argument about exactly what the image of God in humans means. Probably all three proposals I’ve outlined above have some truth, or even a lot of truth. I want to propose using Willimon’s idea to look at our lives for a few minutes.

If God’s image in humans relates to speaking, then our speaking really matters. First, we have to consider the forms that speaking takes. Obviously the words that come out of my mouth when I’m addressing another human being are a form of speaking. Are my facial expressions a part of speaking? My body language? The clothing that I use to cover my body? The way I set the table for guests?

I would argue that all those forms of communication, and many others, are forms of speaking. My Ph.D. thesis (which you can look at here) focused on the ways congregations speak on their websites. Congregations speak through so many means – verbal, visual and in actions – including bulletin boards showing children’s art or posters about local events, signage outside and inside, the welcome extended personally and in worship services, the layout of coffee hour.

Frankly, all of this is a bit overwhelming, a lot like how I felt when I first started hearing that the image of God in us is our ability to be in relationships. If indeed the image of God involves some combination of intelligence, relationships, and communication, then humans so often botch up our call to reveal God’s image to the world. I, as an individual, continually botch it up.

But I can rejoice every time I have the opportunity to convey affirmation and acceptance to someone. I am showing forth God’s image. I can rejoice when God calls me to speak truth into a situation, even when it’s hard. I can pray for Christ’s lordship over the words that come out of my mouth and the words that come from my fingers in written form.

I always knew personal and institutional communication matters. Now I can frame it as a way that God’s image is shown to the world, probably one of many ways, but definitely one significant way. That makes me smile. And it makes me pray that Christians would do it well.

Next week: Make it beautiful. Illustration by Dave Baab. I love to get new subscribers. Sign up below to receive an email when I post on this blog.

Previous posts and articles about communication: