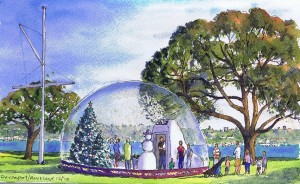 Here in New Zealand, those three busy times are collapsed into one month, the month leading up to Christmas. All the school/university year-end activities, all the Christmas parties and Christmas prep, and all the preparation for vacation happen in the same weeks. I’ve never seen anything like it. When I worked at the university in Dunedin, New Zealand from 2007-2017, Dave and I used my vacation time to travel to the U.S. or around New Zealand other times of the year, so we were here in Dunedin between Christmas and into early January, when the city is a ghost town. It felt like a very large majority of Dunedin residents were away on vacation.

Twenty years ago, when I was an associate pastor in a Seattle church, our prayer leaders usually organized a prayer day from 9-3 on the first Saturday of December, an opportunity to ponder what Christmas means and to make some plans to simplify the month as much as possible in order to focus on the incarnation. I have had so many conversations with Kiwi friends about making space to ponder the meaning of Christmas, and they say they just don’t have time. And I wouldn’t have time either, if I were preparing for vacation and Christmas, while also attending school plays and concerts and hosting out of town family members for graduations.

New Year’s resolutions are another casualty in New Zealand. If you’re on vacation, who wants to think about setting goals for the coming year? A Kiwi friend told me that increasingly in New Zealand, Kiwis are using the Māori New Year, Matariki, which occurs in late June or July, as a time to think about goals for the next year. My friend said that Māori New Year’s goals tend to be communal, rather than individual, which is a lovely thing to ponder.

(For those of you who like astronomy, Mataraki is the Māori name of the constellation Pleiades, or the seven sisters, which rises above the horizon in New Zealand in late June or July.)

I’m writing this post between Christmas and New Years, and yes, Dunedin feels deserted and the streets are quiet. I’m writing this in order to invite readers to think about the role of busyness and intentionality for you in 2021. What kinds of intentionality work for you when you’re busy? Periods of frantic activity can be okay, as long as there are other times of the week or month or year when you can choose to draw near to God, pray, attempt to listen to God’s guidance, and ponder Jesus’ role in your life.

Christians today are increasingly choosing concrete ways to set aside time to ponder what’s happening to us  and in us spiritually, including spiritual direction, silent retreats, pilgrimages, walking prayer labyrinths, contemplative prayer, mindfulness meditation, and other ways of slowing down to ponder the meaning of our faith. For my readers in New Zealand and Australia, I encourage you to think about the times of the year when some direct focus on your life with God would be possible. Probably not December! For my Northern Hemisphere readers, most of these are possible in some form during the pandemic. For those of you who are struggling with all the months of pandemic life, my heart goes out to you, and I pray that you are finding ways to draw near to God in the midst of a very challenging time. May God feel near as we usher in a New Year.

Next week: some thoughts about living so freely in New Zealand while my American friends and family members are struggling. Illustration by Dave Baab: A life size snow globe in January in Devonport, New Zealand. I love getting new subscribers. Sign up below to get an email when I post on this blog.

Some previous posts for New Years: