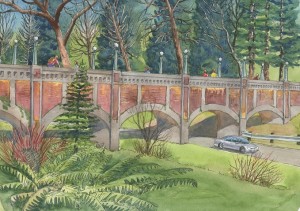 I invite you to ponder this statement: “Through his parables, Jesus was trying to expand the imaginations of his followers.” [1]

Do you agree? Would you say expanding the imagination of his followers was the major purpose of the parables? A secondary purpose, related to the central purpose of nurturing faith in  his followers? Not his purpose at all – why would Jesus care about our imaginations?

The quotation comes from Imagination: Embracing a Theology of Wonder by Cheryl Forbes. My favorite portions of the book relate to Jesus’ use of imagination.  Forbes writes, “You cannot turn a page in the Gospels without reading marvelous images, powerful metaphors, stirring symbols. Jesus leaves none of us out; there is an image there for every one of us – sometimes several. He knew one image would not suffice because every imagination works differently.” [2] Two decades ago I was asked to teach a class at a Bible college about the Gospels, so I read through all four of them. I was stunned by Jesus’ power and skill as a teacher, and part of that skill comes from the vividness of his language.

Forbes’s argument about Jesus draws on the vivid language of the Gospels:

“For Jesus, people had lasting, imaginative meaning. They were either good seed or bad, either fruitful fig trees or barren, either wise architects or foolish. He helped people understand themselves through images, metaphors, and symbols. He constantly asked people, Which image are you? Which metaphor will characterize your life? Are you the persistent widow? The good Samaritan? The mustard seed? The prodigal son? The field hand? Some of his implicit questions came in the form of parables, stories; other were merely short sentences, almost idle asides as he and his followers walked the shores of Galilee.” [3]

“Jesus healed the blind, the deaf, the leprous; he brought the outcasts of society into the mainstream of Palestinian life. He cured the acutely ill as well as the chronically ill. Yet he cast out – verbally, at least (though his words symbolize a future act) – those who lived at the very heart of Jewish religious life, the Pharisees, Sadducees, lawyers, rabbis, and priests. He knew they were not just people, but whitewashed sepulchers, a marvelously imaginative image.” [4]

Forbes would argue that we can’t grow in our faith without using our imagination. How does Jesus teach us the great values of the Christian faith: justice, mercy, compassion, and forgiveness? “Reading or hearing about morality in a context divorced from people is not only dull but a waste of time. Jesus knew that. That’s why he talked about people, why he gave examples, told stories, spoke in metaphors, images, and symbols.” [5]

I invite you to spend some time this week pondering the pictures from the New Testament that lift your heart toward God, maybe the Good Shepherd (John 10:1-21), the vine and the branches (John 15:1-11), or the lilies of the field (Matthew 6:25-34). I invite you to ponder the images from the Gospels that motivate you to follow and obey Jesus, maybe treasures in heaven (Matthew 6:19-21), the house built on the rock or sand (Matthew 7:24-27), or the sower and the seed (Matthew 13:1-24).

Lord Jesus, you called yourself the Good Shepherd, the True Vine, and the Light of the World. Help us meditate on the ways you described yourself, so we can love you more deeply. Holy Spirit, you work in us to guide us into truth and to empower us to serve God. Flow into our lives like living water, freely, abundantly and powerfully, so that we can be disciples who grow and serve our living Lord. Amen.

(Next week: Jesus’ creativity in relationships. Illustration by Dave Baab, one of his pandemic paintings: a foot bridge in the Seattle Arboretum that was originally built as a sewer trestle.)